This is the best and most expressive a character has looked all season, by the way.

If ever there comes a time where I am not a complete sucker for the “Minako as Moon princess” storyline, you put me in the ground because I am probably dead. This weekend, Sailor Moon Crystal delivered on that front. I just wish it could only give me more.

As always, these recaps might not be the best reading if you know nothing about Sailor Moon and don’t like being spoiled for certain plot points in advance, so if you want a totally pure spoiler-free experience, why not try Susana Polo’s Sailor Moon Newbie Recaps instead? They’re pretty great.

So Sailor V(enus) is here, finally, and wearing a brand spanking new outfit (and I can’t imagine this was intentional given this show’s sloppy track record with animation, but for one frame she is wearing the V fuku, and it’s very weird). The other girls remark on how different she looks now, and even Beryl’s confused—after all, there are only supposed to be four senshi. Artemis adds, “Oh but she’s not just any senshi, SHE’S ALSO TOTALLY THE MOON PRINCESS I HOPE EVERYONE FROM THE DARK KINGDOM IS LISTENING YUP HELLO PRINCESS RIGHT HERE TAKE OUR WORD FOR IT.” It’s very convincing.

Meanwhile, Sailor Moon gets a new crescent-shaped tiara for definitely no reason that has anything to do with being a Moon Princess at all. Yep. 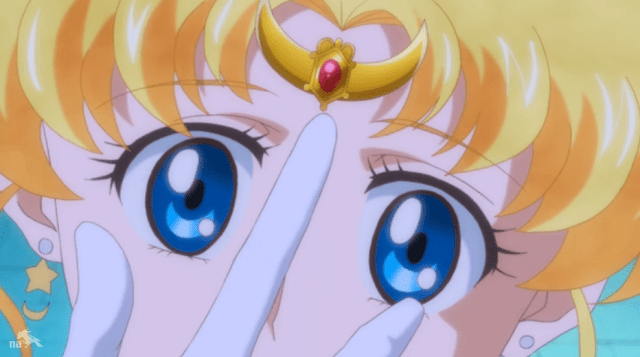 This tiara always looked pretty weird to me in the manga, and here it’s even worse: she looks like she has tiny baby horns most of the time, and it’s usually not symmetrical, as you see above. But the “hey she totally must be Princess Serenity because she has a crescent moon on her forehead WAIT SO DO I FOR NO REASON” thing is kinda funny, at least.

Seeing that he’s outnumbered and forgetting that he’s taken out most of the senshi present with a single blow multiple times at this point, Zoisite nopes out of there. So does Tuxedo Mask, who overhears the name “Princess Serenity” and gets all conflicted about his inability to protect Sailor Moon. Venus recognizes him immediately and does not appear to approve, which I find hilarious. She then explains that she and Artemis have been behind the Sailor V game all along and de-transforms in front of the rest of the girls, telling them that her civilian form is a “temporary appearance.” She’s referring to the fact that her civilian duties are not as important as her senshi ones, but I’m also loving the foreshadowing there (but I do wish they’d kept in that part from the manga where Usagi tries that same line out on her dad).

Back at the Game Center headquarters, Minako updates everyone on the goals of the Dark Kingdom and her past role as Sailor V. I joke about how convincing she is as a Moon princess, but she actually is: she has this warm-yet-aloof, commanding presence that works perfectly for what you’d expect from the leader of a lost civilization. Also, everyone keeps calling her Sailor V and then correcting to “Princess” instead of her actual name and swearing their allegiance to her, which is great right up until she’s alone with Artemis and then it’s heartbreaking. 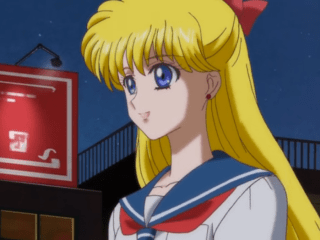 At first I lol’d… 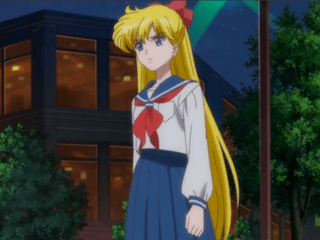 “But Minako, you don’t have to do this along anymore,” Artemis says. “You have other people you can count on now!” “NO ARTEMIS YOU KNOW I HAVE A MISSION AND NOBODY ELSE CAN DO IT GAWD,” she replies. Meanwhile, somewhere in the expensive part of Juban, Haruka Tenoh’s entire brain is on fire and she doesn’t know why.

Meanwhile, Usagi is continuing to have more and more intense dreams about being Princess Serenity. “I bet it’s because I just met Princess Serenity!” she thinks. Oh, honey. On her way to school she sees Mamoru and he acts all weird about not being able to protect her again, but then they both realize that they’re holding on to one another’s stuff and make fake flirty plans to swap later even though they totally won’t. Luna looks on, annoyed, until Artemis comes to collect her—there’s some stuff they’ve been keeping from her by sealing part of her memory off, and now it’s time to get her up to speed.

Beryl is doing something similar, updating Metallia on their process. “Hey so screw that Moon princess chick,” Metallia says, and Beryl agrees, sending Kunzite to go take care of her. He does the usual “Bring the Silver Crystal to Tokyo Tower and come alone or I’m going to explode everything” move and Minako is only too happy to oblige, until OH NO FRIENDSHIP! 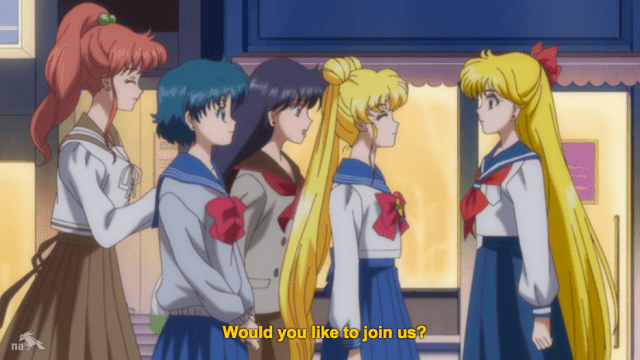 They’re all going to have dinner at Makoto’s place and they came to get Minako so she could come oh my god. NO SORRY I HAVE TO NOT BE HERE GOODBYE Minako yells and runs away, and then three seconds later all the power in the city goes out and everyone in the whole town collapses, so that’s definitely not anything suspicious.

Over at Tokyo Tower, Minako transforms (and how much do you LOVE how flashy she is with her pen compared to the other girls?) and confronts Kunzite, begging him to remember his “true self.” Yeah, for someone who doesn’t remember anything about who he is or where he’s from, Kunzite does a heck of a good job pushing some very Venus-specific buttons, such as how she isn’t capable of protecting anyone no matter what life she’s been born into. Dang, man.

But then IT GETS EVEN WORSE, because the rest of the senshi arrive (via flying Sailor Jupiter shield, which I never knew I wanted until right now) to protect their princess—no, to protect Minako, because that’s what friends do. And Venus is not having it. Sailor Moon gets hit by one of Kunzite’s attacks and she goes to help, but Jupiter scoops her up to save her from the danger. Crystal, that is the exact kind of little character detail I have been hoping for all season. PLEASE DO MORE OF THAT.

Don’t worry about Sailor Moon, though; as usual, Tuxedo Mask scoops her up. She rewards his efforts by telling him to flee to safety while the girls beat up the bad guy and them making the heck out with him and running away. It’s the best past of the whole fucking episode. 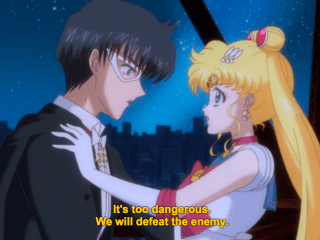 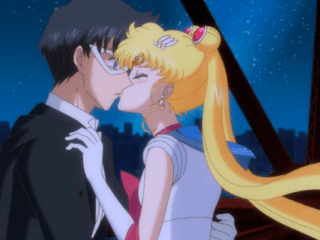 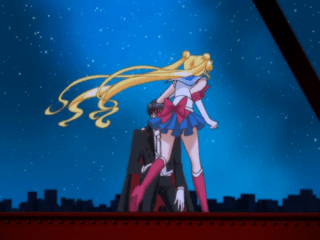 HAVE TO GO SAVE THE WORLD NOW BYE 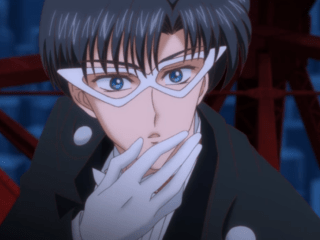 See how much better it is when everyone’s awake Mamoru

Sadly the badassery is ridiculously short lived due to Crystal‘s pacing problems, because after like a full minute of hearing how Tuxedo Mask feels about that kiss, Kunzite throws another attack at Sailor Moon and Tuxedo Mask puts himself between her and the blast to save her. OH NO TERRIBLE CLIFFHANGER TIME HAVE FUN SITTING ON YOUR HANDS FOR THE NEXT TWO WEEKS.

Overall this episode was definitely an improvement from the last two, because—well, because Minako, that’s why. She’s so much more complex as a character than most people give her credit for, especially earlier in the story when she has to be this authoritative leader and isn’t allowed to be as fun or goofy as she wants to be. Crystal did a pretty good job of that for me here, though I still think the breakneck pace of the narrative is still really sapping a lot of the possible character growth out of everyone who isn’t Usagi or Mamoru right now. But more of that juicy Silver Milennium backstory is coming soon, which should be stupendous; Crystal does pretty well, after all, and nothing’s prettier than the Silver Milennium. Just saying, if I see senshi princess dresses, all the other animation problems will be forgiven. Can’t wait.