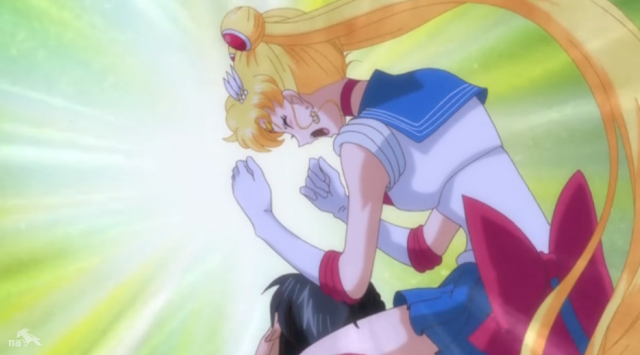 In this episode of Sailor Moon Crystal, dang it if a bunch of crying senshi don’t get me all emotional, too. It’s just ingrained in me at this point. But crying aside, how good was the actual episode?

As always, we’re gonna be getting deep into the Sailor Moon lore here, so if you’re new to the franchise and don’t want to be spoiled for any of the other versions of the story, maybe start with Susana Polo’s newbie recaps of the OG anime instead. Even if you’re a longtime Moonie, you should check ’em out anyway, because they are great.

So, last week saw Tuxedo Mask get brutally mowed down while protecting Sailor Moon, and those of us who are familiar with the story know what’s coming next— Usagi’s about to transform into the long-awaited Princess Serenity and totally amaze everyone, yeah? It’s gonna be awesome, right? Right? 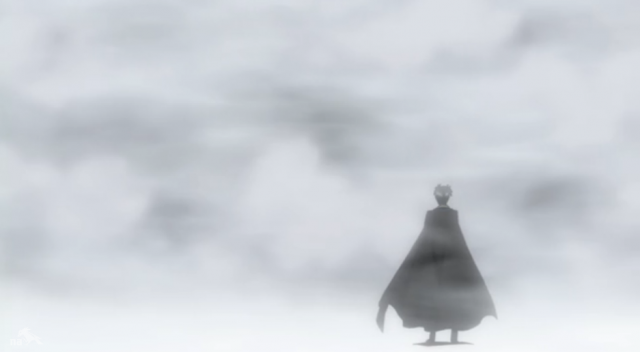 Oh. Okay. I guess we could make this about Mamoru again instead.

Don’t get me wrong, Mamoru is great. But I don’t know that I appreciate being dropped into a Scott Pilgrim-style wide-shot of Mamo’s inner monologue so that he can wax poetical about his feelings for Princess Serenity, when instead they could have just gone straight to her transforming and kept the momentum going, rather than save that transformation after the next commercial break. I’m fully aware that this is how the manga reveals her identity as well, and as much as I love how ethereal and dreamlike the manga is, the direct translation from page to screen just doesn’t work here for me at all. And while I’m at it, it I know all characters are hovering over Tokyo Tower in the manga too, but it looks so weird here. Listen, guys, it wouldn’t be that hard to drop everyone down so that they were all standing on the normal ground. Is anyone else feeling me there?

Anyway, eventually Sailor Moon goes Super Serenity and begins regaining her memories of the Silver Millennium, when she would travel to Earth and visit Endymion despite their love being against “God’s rule.” That line always bothered me in the manga, too—which God? How does that work and why? But anyway, it’s not like we don’t know how forbidden love works, so let’s keep chugging along to the part where they both die horribly in a terrible battle, and then bring it back to present day, where one of Serenity’s tears transforms into the Legendary Silver Crystal and basically blinds everyone (oh, and makes a lot of flowers bloom—it’s actually pretty gorgeous, not gonna lie).

The light from the Crystal goes into Mamoru’s body to heal him, possibly, and thinking that the whole Crystal’s in there somewhere too, Beryl and Kunzite Mamo-nap him and cart him off to the Dark Kingdom—but not before the senshi actually manage to get a few attacks in that look pretty rad and don’t end up with them getting knocked out on the ground. Also, can I just say that I will never tire of Mamoru getting kidnapped? It subverts so many delightful tropes.

Serenity’s not too happy about it, though. The senshi take her back to their headquarters and appear to set her up with a sadness pedestal so she can cry out her feelings as daintily as possible: 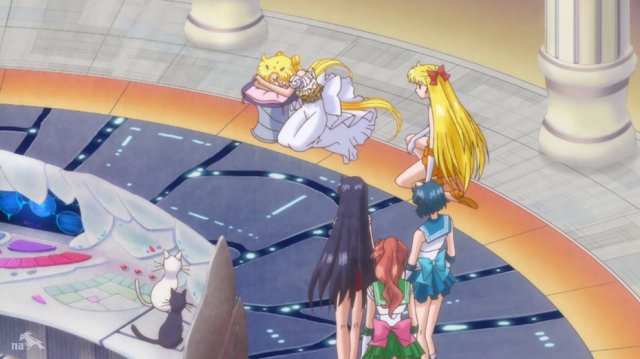 I joke, but I could use a sadness pedestal. Right now my depression snuggie just isn’t cutting it.

Venus confirms her true identity of “NOT Princess Serenity” to the rest of the girls and claims her rightful place as the leader of the senshi. We get even more backstory about the Silver Millennium and watch Endymion get run through with a sword for something like the third or fourth time this episode, but this time from the POV of the senshi, who are fighting off hundreds of soldiers by punching their words in half? WHY do we spend so much time on Mamoru again?

Anyway, Usagi freaks out that she’s not a princess, she’s just an ordinary schoolgirl who wanted to fall in love with a cute guy, and everybody starts crying, and then she passes out. Oh well, done with that I guess. Let’s jump over to the Dark Kingdom, where Kunzite and Beryl know they saw the light from the crystal go into Mamoru and why isn’t it in there, damn it!

Then the four shitennou almost have something not unlike an epiphany when they all stand around Mamo’s body and almost maaaaybe recognize him. I talk about how annoying it is when Crystal refuses to deviate from the manga a lot, so here’s credit where it’s due: the fact that none of the shitennou have died actually works wonderfully here. In the original manga, they all get brought back to life in this really weird and convoluted way during this arc and regain their memories immediately just to get killed off again, so the fact that they never died to begin with streamlines their story much better. I do sort of wish they’d use the same care with the senshi’s storyline, of course, but I’ll take it where I can get it, I suppose.

Meanwhile back in Senshi-land, the girls and cats go to visit Usagi after a few days and are told that she hasn’t left her room at all. They find that for some strange reason her hair’s been rapidly growing, possibly because Princess Serenity kept her hair so long. You know what that means—friendship hair makeovers! 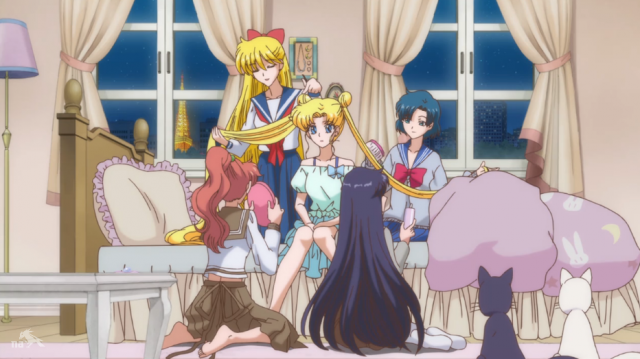 Favorite scene of this entire story arc for sure.

Usagi worries about losing her identity to her newly rediscovered princess-hood and begins to get anxious about not being able to save Mamoru again, but the girls calm her down and tell her that she is strong, and she doesn’t need to follow the same path anymore that she did as a princess, because she’s not that girl anymore. “You were reborn as you for a reason,” Rei says. And then they’re all crying and everybody hugs each other and no I am not getting all teary-eyed again writing this recap YOU ARE 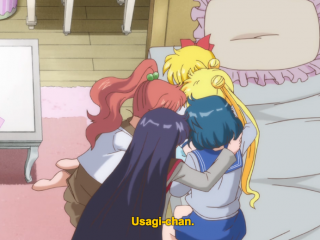 you stop it right now, show 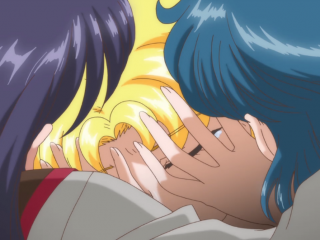 i said stop HOW DARE YOU

”Hey, you know what we should do?” Luna says to break up the senshi friendship cuddle session. “We should totally go to the moon.” And because Usagi’s not a particularly smart girl, this galvanizes rather than confuses her. I mean, I guess if you’re already resigned to being from the Moon then you’re not worried about, like, where all the atmosphere is and stuff. “I will never be a tragic princess again,” she tells her friends, which is basically Crystal-speak for “HELL YEAH LET’S GO TO THE MOON SCREW THESE CLOWNS I’MMA GET MY BOYFRIEND BACK.”

All in all, I was fairly satisfied with this episode—though as always, I do wish they were making more of an effort with the characterization. As much as senshi-friendship-happy-feels still do it for me no matter what form they come in, those scenes would not have nearly as much impact if I didn’t already have a connection to the characters from both the original anime and manga, and even the live-action—there’s just less to go on in the Crystal version of things, which ironically makes it the least accessible of all the adaptations of the story so far. But at least the animation’s picking up and it looks super gorgeous now, I suppose.

Speaking of super gorgeous senshi-friendship-happy-feels, here’s bunch of ’em that you can make into desktop wallpapers because of course we all want that (no seriously, click to embiggen): 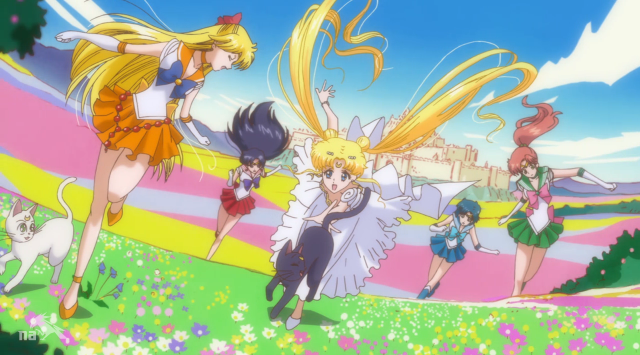 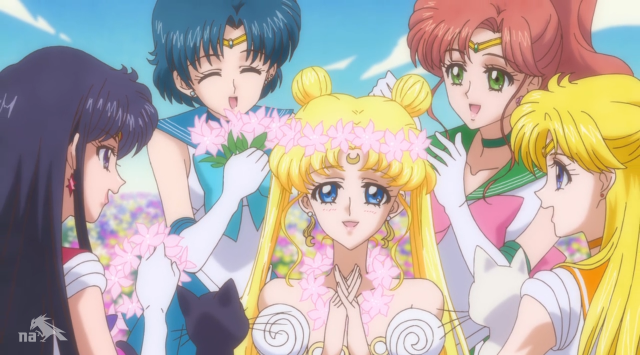 WHO GAVE YOU THE RIGHT

What did you guys think?