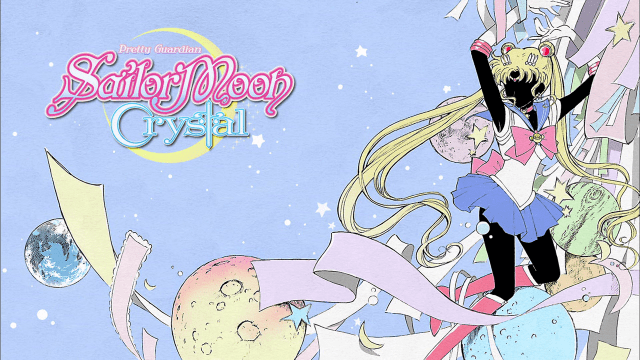 It’s finally here! After years of anticipation and planning, the long-awaited reboot to Sailor Moon has at last arrived. But does it live up to the hype? Let’s find out in our new series of recaps.

A note: this recap is intended for people who are familiar with the basic story of Sailor Moon already. If you’re new to the franchise and want to start out with the original series, Susana Polo has an excellent series of newbie recaps to check out. Otherwise, scroll past the dumpling-eating Usagi for more. 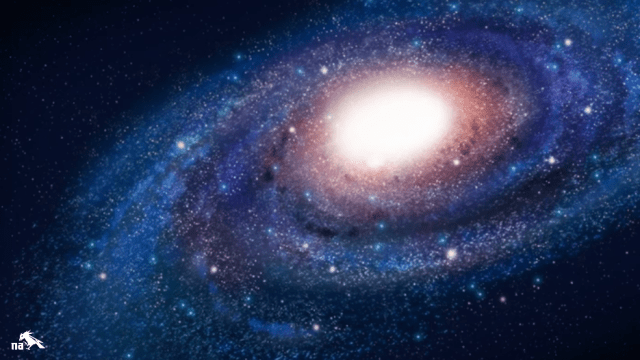 FROM A FAR AWAY TIME AND PLACE, EARTH’S GREATEST ADVENTURE IS–whoops, sorry.

That’s right, for the first time I can remember since the North American dub, we’re starting with a Silver Millennium flashback! Guess the Crystal writers figured there was no point in trying to conceal the reincarnated moon princess thing too much, I suppose. 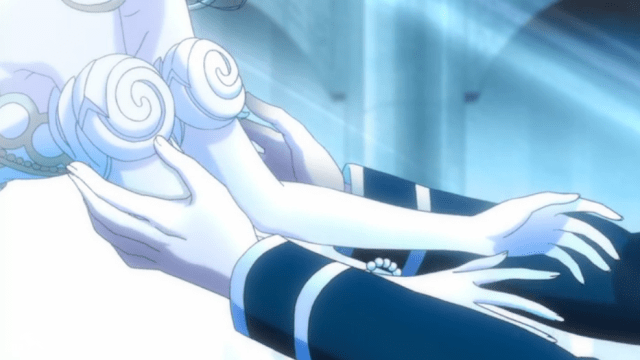 That sound you hear is cosplayers furiously scribbling diagrams.

Neither Serenity nor Endymion’s faces are revealed, but the mystery is more of a formality at this point than anything else. Most of us know the story, and those who don’t can guess, considering that the official “Usagi wakes up late for school” beginning starts soon afterwards and the whole thing is revealed to be her equivalent of a Slayer dream.

And then we’re off! Kotono Mistuishi is doing some great work reprising her role from 20 years ago, and you can barely tell any time has gone by as she shouts for her mother (whose hair is much lighter and more reminiscent of Takeuchi’s art book illustrations) and then slips and falls down the entire length of the stairs butt-first. “I just hope you can learn from Sailor V,” she says in reply as she looks down at the very-relevant-and-foreshadowing-newspaper-article about Sailor V.  Ohhh, Ikuko. I bet you probably meant something like “Maybe don’t fall down literally everywhere you go,” but you are going to regret those words.

As Usagi runs off down the street–we still haven’t seen her face, by the way–the opening title credits begin to roll. As much as we’re all going to miss the dreamy “Moonlight Densetsu,” I’m 100% on board for “Moon Pride.” Seriously, you can’t go wrong with lines like “We will fight on our own without leaving our destiny to the prince” and “We are not helpless girls who need men’s protection” –which, ironically, are both sung while Mamoru is on screen. The visuals are similarly empowering, switching back and forth between the senshi quietly reflecting on their fates, reaching out to each other in friendship, and deftly taking down scores of enemies. It’s everything I could have wanted and you need to stop everything you’re doing and watch it on Hulu immediately (it starts about 2:48 minutes into the episode). The only problem I have with it is that Queen Serenity is blonde for some reason. I know this isn’t without precedence, but it bothers me nonetheless.

Anyway, back to the episode: rather than her literal “save the cat” moment from the first anime where Usagi rescues Luna from a group on unruly children, here we have her accidentally stepping on her instead and falling flat on her face, just like she did in the manga. Of course, first she introduces herself to the audience in the girliest way imaginable. 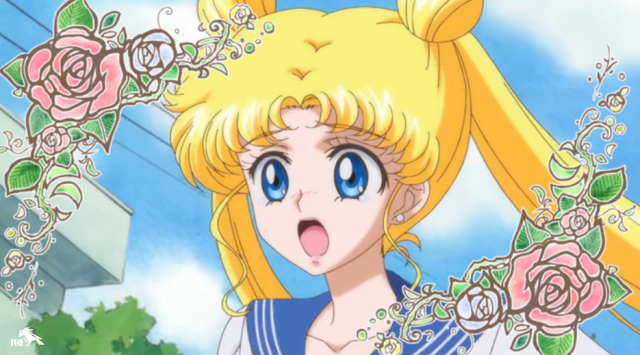 “If there’s one thing we learned from the first anime, it’s that GIRLS LOVE THE HELL OUTTA ROSES”

As much as they’re going out of their way to make Usagi clumsy, I do wish they’d show us her face during these moments where she falls down. Part of Usagi’s charm is that she’s so emotive, and while I appreciate that she’s not as dead-eyed as everyone feared from the initial character designs, it would be nice if they were less afraid to go a little weirder with her expressions, if only to keep from falling into the “you have to keep them pretty” trap.

From there we get the obligatory peel-off-the-bandaid scene, as well as a brief Dark Kingdom scene where an oddly Beryl-less Jadeite orders his youma to locate the Legendary Silver Crystal. Then the rest of Usagi’s day goes as we’d expect: she’s forced to stand outside in the hall (where she wishes she were the princess from her dream so she wouldn’t have to go to school), gets chewed out for her poor grades by Haruna-Sensei (who, like Ikuko, is pastel-haired), learns about the wonders of Sailor V from Umino, and then heads to the OSA-P jewelry store with Naru (and two extra friends from the manga! Yay!).

After leaving OSA-P–and points to the new Naru for immediately noticing that something is up with her mom, by the way, because highly intuitive Naru is my favorite kind of Naru–Usagi throws her failing test over her shoulder and guess who she hits, I bet you won’t even guess 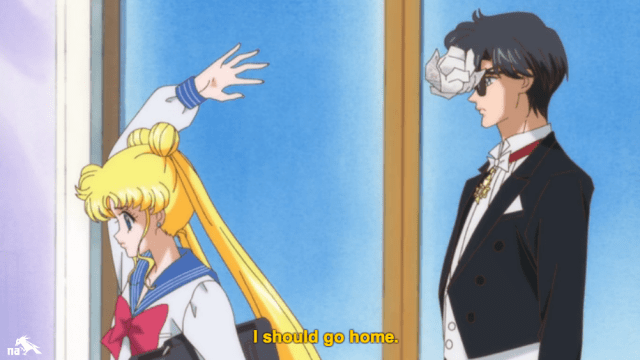 I had to screencap this moment five times before I got the point of impact. Worth it.

It’s Mamoru! The banter starts off antagonistically, and of course he calls her “odango-atama,” but then they lock eyes and there’s an immediate connection between them. While I’m hopeful that the romance won’t overpower the girl-power friendship, I did actually like this moment–in the original series they spent more time griping at each other than anything else, so the fact that the new series is going out of their way to set up their attraction to one another is encouraging. But the scene ends with Usagi storming off anyway, as well it should. 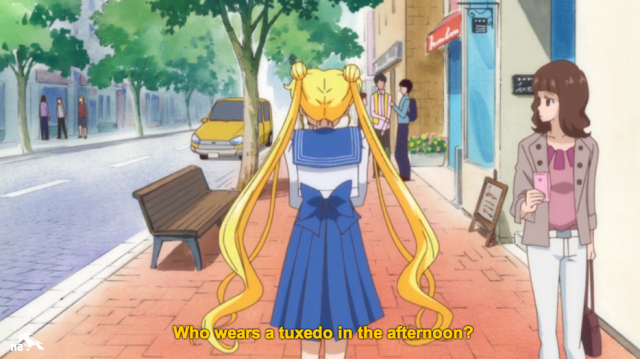 Also, I love that Mamoru is quite literally casing a place he’s later going to break into wearing the clothes he is going to wear when he breaks in. Never change, you beautiful dork.

Perhaps needing to vent her romantic energies a bit, Usagi stops by the Crown Arcade to play Sailor V games with her current crush (and she also wishes she were Sailor V so she wouldn’t have to go to school–Usagi, maybe just go to school?), heads home to get briefly kicked out by her mother for poor grades, and then falls asleep upon being allowed back in, dreaming of princesses and rescuing Luna from video game monsters.

Oh, hey, speaking of Luna! Her moment has finally come, and she enters the same way she always does–by snidely telling Usagi that her moon isn’t a bald patch, thank you very much, and giving her a brooch that once again completely distracts Usagi from all the weirdness because YAY SHINY. But joke’s on her when Luna tells her to call out her transformation phrase and literal magic happens.

While at times the CGI feels a bit hollow (and as a side note, what’s up with them including the skirt band on the unitard the whole time? That looked kinda weird), the perspective shifts are incredible, the ribbons at the beginning gave me chills on first watch, and it’s clear that a lot of love and passion for the original series was put into this animation. So while it’s not my favorite, I will allow it to grow on me as the series progresses, just like the cheesy PGSM sequences did once the initial shock subsided.

Usagi is understandably freaked out, but she jumps into action when she hears Naru shouting from the other side of town. When the youma asks her who she is, she names herself in her speech, which she does exactly the same way she used to in the original anime and oh my god my heart. I can’t deal with these emotions.

And neither can Sailor Moon, because a bunch of jewelry zombies descend on her and she scrapes her knee, then bursts into tears–which stops the zombies with a powerful sonic boom that shatters glass because of course it does. Tuxedo Mask takes this as cue to give her the very useful advice of “hey maybe you should stop crying and beat that lady up,” and Luna agrees, telling Usagi to chant “Moon Tiara Boomerang.” Now, if my tears could cause extensive property damage like that, I would probably never stop. But I guess you know best, talking cat!

Anyway, “Moon Tiara Boomerang.” It’s rad, and the updated name is a cool nod to both the live-action PGSM and the 10th anniversary edition of the manga.

The youma collapses in a heap of dust upon impact, and that’s when Tuxedo Mask decides it’s safe to come out and congratulate her for being so awesome. That’s right, not a single rose is thrown! Guess they ran out after using ’em all in those shoujo introductions. 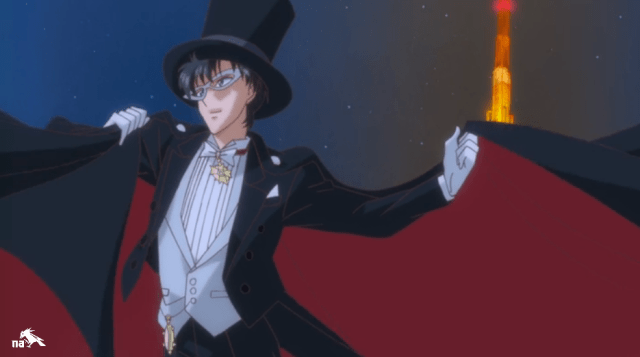 “I’m helping!” (to be read in a Ralph Wiggum voice)

But Sailor Moon’s still totally into dat bishounen sparkle Tux’s got goin’ on–which Jadeite can see from his fancy crystal ball from what must be D Point at the North Pole (there’s snow outside and everything! How’s that for detail?), where he, I dunno, swears vengeance on her or whatever. Listen, it’s Jadeite. If he’s gonna be anything like his anime counterpart, he can be pretty easily ignored. Wake me up when Zoisite arrives, and make sure the rose budget is doubled by then.

The next day Usagi is disappointed to learn that all her crying and butt-kicking actually happened and now she has *shudder* responsibilities. See, this is what you get for making idle wishes about not having to go to school. But all is not lost, because she’s going to get back-up! The most intelligent, adorable backup ever. 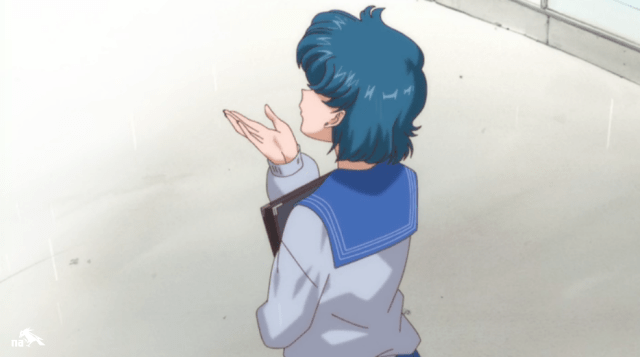 Oh my Moon God, we’re getting Sailor Mercury already! We still have to wait two weeks for the next episode, but hooray for Ami!

All in all, any problems with the animation that I personally had are minor, and I can overlook them to applaud how well these writers seem to get the personalities they’re working with. Having a familiar voice to fall back in definitely helps with Usagi’s characterization where her usually-expressive face falls short, and with any luck they’ll loosen up with her as the series progresses. We haven’t officially met the rest of the senshi, but the tone that the opening credit sequence sets up gives me the utmost confidence in their portrayals. I enjoyed myself watching the episode, and I’m excited to see more.