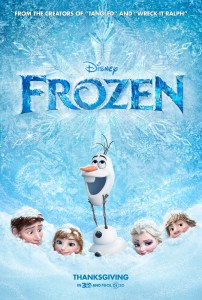 “Historically speaking, animating female characters are really, really difficult, ’cause they have to go through these range of emotions, but they’re very, very — you have to keep them pretty and they’re very sensitive to — you can get them off a model very quickly. So, having a film with two hero female characters was really tough, and having them both in the scene and look very different if they’re echoing the same expression; that Elsa looking angry looks different from Anna (Kristen Bell) being angry.”

When I saw this quote circulating around Tumblr last night I assumed it was made up. Did Lino DiSalvo, Frozen‘s head of animation, really say that animating female characters is difficult because they’re so “sensitive” and “you have to keep them pretty”? Unlike male characters, who are far, far more stoic than we emotional womenfolk, amirite? But no. It appears that this is a legit thing that he actually said.

Look, I get that character design and animation are difficult. But why would male characters be so much easier to design than female characters? Why is it so tough to create female characters who don’t look alike? (So tough that Disney still has a hard time managing it.) No, really, I’m asking. Lino DiSalvo obviously knows more about animation than I do, so surely there’s some kernel of something in this statement that means it’s not solely a giant ball of sexist WTF-ery. Right? Right?!

(via: MovieViral, thanks to anon tipster)