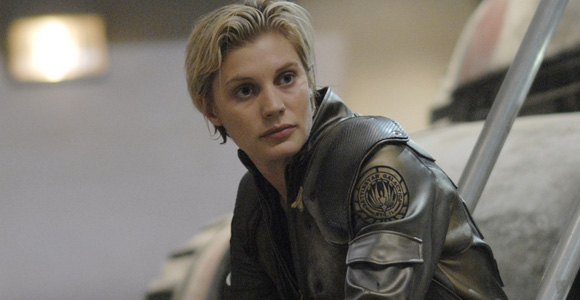 Considering we’ve been freaking out over the possibility of Katee Sackhoff joining the Marvel Universe, we’re glad someone decided to ask her to clarify her recent comments. But is the news good or bad? Hit the jump to find out!

Sackhoff has been talking about comic books a lot lately. First she mentioned selling her first-born child to play DC’s Harley Quinn, then it was saying as little as possible about meetings with Disney. To be fair, she was asked about Marvel Entertainment films on a podcast and said things like “there’s been some stuff going on” and that there’d been “a lot of checking of availability for the first quarter of next year.”

But thanks to CraveOnline, those comments become clearer.

“You know, you say one thing… People love a good story, even if it’s a story that has very little truth to it. If you go back and actually listen to what I said, I said that people have checked my availability. I never said Marvel [or] Disney so it’s interesting how people twist stories to serve an agenda that makes people click on their site, or sell their papers,” she told them. “I absolutely have not spoken to Marvel. It doesn’t mean that my team hasn’t spoken to Marvel. I personally have not spoken to Marvel and have no plans to do a movie in the immediate future, because number one I’m tied up with Somnia which is a fantastic place to be. It’s exactly where I wanted to be.”

Bah! To be fair, the podcast interviewers asked specifically about Marvel/Disney so while Sackhoff herself didn’t mention them by name, she was responding to a question about them. How could anyone think she was talking about anything but that? Maybe she got in trouble.

No, it may not be the next movie, but it might not be too far off.