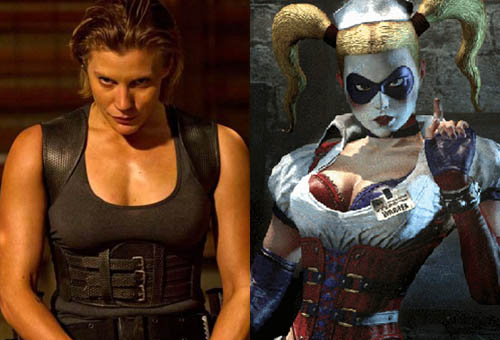 “I love Harley Quinn. I do. I just love it…It’s not been done before. It’s this fantastic mix. I mean, it’s like the female Joker. Who wouldn’t want to do that? Quite potentially — it’s not around so I wouldn’t feel the weight of it — I’d probably sell my first born at this point to do that.” – Battlestar Galactica and Riddick actress Katee Sackhoff speaking to Esquire.

The only time Harley Quinn has been portrayed as live-action was by Mia Sara on the failed Birds of Prey television series. I have to admit, Sackhoff never came to mind for me when considering a live-action Harley but I could totally get behind it. Not that there’s any plans for the character to show up in a DC film anytime soon but I eagerly anticipate her being brought to life again.

And no, her playing Harley wouldn’t stop her from playing Captain Marvel (Carol Danvers) for Marvel. We still want that to happen.