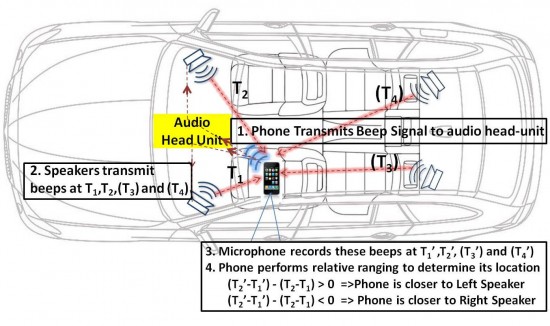 The National Highway Traffic Safety Administration estimates that drivers who text while driving are 23 times more likely to crash. A team from Rutgers University has developed an application that may prove useful in preventing accidents caused by distracted driving. Will it be the answer to solving the nationwide problem of texting and talking while driving? They certainly seem to think so, but it might just end up being an annoying obstacle.

Despite a number of laws implemented to put an end to distracted driving, the number of collisions attributed to using mobile devices does not appear to be going down. Studies have found that one in twenty accidents are, in some way, related to drivers talking on a cell phone. There’s no doubt that using mobile devices while driving is a dangerous but incredibly common problem in the United States. Everybody’s doing it.

There have been a number of attempts to curb accidents caused by distracted driving in the past. Many apps use GPS to disable smartphones if they are travelling above a certain speed. This creates problems for users who are riding as passengers in a car or on a train, preventing them from using their phones when there is no danger involved in texting or talking. Because of these issues, none of these apps have proven very effective in preventing accidents.

A team of engineers at Rutgers University may have found the answer to the problems associated with previous apps, however. Their own application uses a car’s Bluetooth capabilities to determine where in the car a user is sitting, and will only disable a phone’s texting and calling if its user is in the driver’s seat.

Specifically, the app works by sending a high-pitched tone through a car’s speakers via Bluetooth connectivity. Depending on when the phone picks up this tone with its microphone, the app can tell where in the car the phone is located. If it’s, in fact, in the driver’s seat, the app can prevent texts from appearing and can send automated reply messages informing senders that the driver is busy and that they’ll respond later. Sounds great, right? Maybe not.

There is no doubt that this is a vast improvement over previous attempts to prevent collisions due to distracted driving, but there are a few problems that cripple this app. First and foremost: It’s completely voluntary! No one is required to use it and will have to download it in order to do so. There’s more than a good chance that it won’t be the people who cause accidents that will be downloading this app. Second, if you don’t have a car with a Bluetooth-enabled speaker system, the app is unusable. The 1995 Mercury Tracer I received at 16 certainly didn’t have Bluetooth connectivity; it barely even had a speaker system. In addition to all that, what if you want to text your date from your car outside their house? Not in the driver’s seat!

Still, congratulations to the team at Rutgers for developing a new solution to the problem of distracted driving. The app will be available for download on Android devices first and iOS devices at a later date. The app’s a fine piece of work, but will it reduce the number of accidents caused by texting behind the wheel? Not likely. People will find a way to text, whether by holding their phone out the window or by turning down their speakers to stop the high-pitched tone from reaching their device. Life find’s a way.