People Are More Likely to Lie When They're Texting 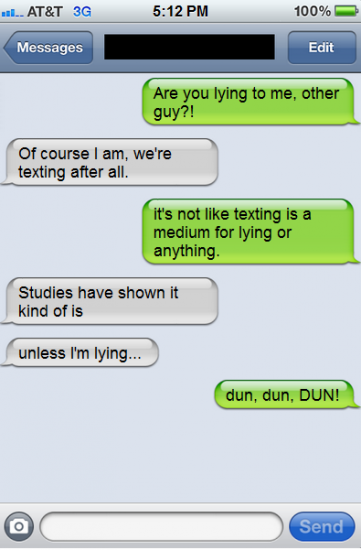 A recent study conducted by researchers at Sauder School of Business at the University of British Columbia has shown that, when given a good reason to lie, someone who is communicating via text message is way more likely to lie than others. The test involved setting up 170 college students in a mock stock exchange of sorts, where half the group acted as brokers and the other half as buyers. The lying came in when the researchers got a little bit of real money involved and gave the brokers inside information they could use to make a little more green and stiff the buyers. Of course, pulling it off required lying to the buyer, and the text messagers seemed to be way more OK with that.

The different broker-buyer pairs were interfacing a variety of ways, specifically face to face, video chat, audio chat, and text message. After the deal went down, the researches looked at how many brokers had lied to their buyer via each type of communication. The numbers broke down like this. 83% of text message brokers lied to their buyers, audio chatters were at 71%, face-to-facers came in at 63.6%, and curiously enough, video chatters were the most honest with a lie rate of only 43%.

The take away of the study, of course, is that when people are communicating by text message, they’re more likely to lie for their own benefit. Of course, this raises a few questions as well, for instance, why? On the one hand, it could be because when texting, you don’t have to see the other person’s face, or even hear their voice, so you don’t really have to think of them as a real person. That makes a liar feel less guilty about lying. On the other hand, it also means that lying is just way, way easier, regardless of how torn up about it you may or may not be. You don’t have to try to keep a straight face, or even an unwavering voice. Just type and send. It’s sort of a question whether the main factor is the compartive ease of lying by text, or the comparative guiltlessness.

Also, what is up with video chat coming in with a lower lie rate than face-to-face. I honestly can’t think of a single reason that should be the case. I guess that’s just another avenue of study this research opens up. I guess the lesson to be learned there is if you don’t want someone to lie to you, talk to them on Skype. Only talk to them face-to-face if you intend on punching them out when they lie really poorly, or something.

lyingSauder School of Business at the University of British Columbiatext message