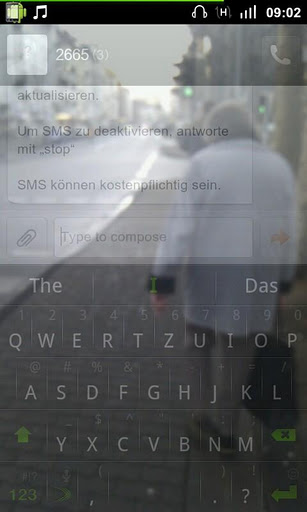 If you’re from this century, you know all too well what it’s like to be walking down the street — texting — and then trip on a curb, or accidentally kick a puppy, or fall down an open manhole. Okay, maybe you aren’t that familar with the actual events, but I’ll bet you’ve feared them before, but not quite enough to put away your phone. Well, the “Transparent Screen“ app for Android has your back and, catering to your lazy fear, will let you look through your device to see all obstacles in your way.

Obviously, Transparent Screen isn’t altering the makeup of your device, but rather is utilizing the camera in order create the illusion of transparency; as such, it’ll eat away at your battery. There are, however, a number of customization features you can use to minimize the damage, and to customize other things. Naturally, you can scale the level of transparency to whatever you require, but you can also change the frequency with which the camera updates depending on whether you’re glancing down now and then or really staring daggers at the bad boy.

It’s a neat idea, but it really seems to straddle that fine, fine line between awesome and stupid. On the one hand, can’t you just not look at your device while you’re walking? You know, in order to avoid potentially grievous personal injury to yourself and others? On the other hand even though you could look away, you probably aren’t likely to, s0 if you’re going to walk and text, might as well do it “safely.” Also, it’s worth noting that Transparent Screen won’t help you see the car that’s barreling at you from the side, which is just as much a danger whether your staring at your phone or your feet.

Rambling aside, if you want to try out the app, it’s available on the Android Market for exactly zero dollars, so there’s no harm in trying it out. That being said, it doesn’t necessarily give you an excuse to be an idiot, as handy as that would be. That app is still in development.