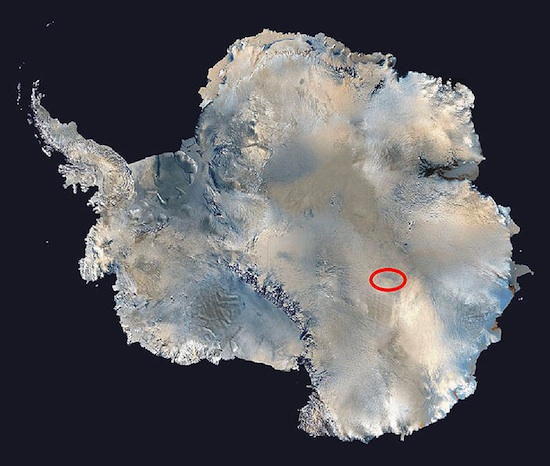 After twenty years and 2.2 miles of drilling, a Russian scientific team has reported that they have breached the ice cap above Lake Vostok some 3,768 meters beneath Antarctica. Though many had theorized the existence of lakes beneath the antarctic ice since the 19th century, conclusive proof of one did not exist until 1993 when satellite data confirmed that an ancient fresh water lake did indeed exist. Untouched for nearly 15 million years, breaching Lake Vostok could have wide ranging effects on our understanding of life itself.

The news that scientists had finally broken through the ice yesterday could not have come soon enough. The antarctic summer is short, beginning in January and ending early in February. If the break was not made this year, scientists would have had to wait until next season to resume drilling.

However, merely breaking through the ice is not the singular goal of the expedition. Because the lake has remained completely isolated for 15 million years, there is great concern within the scientific and ecological community about the damage from outside contamination. In order to prevent that, scientists conducted the final stage of drilling using a thermal probe to melt the surrounding ice, and filled the channel with silicone oil to prevent re-freezing and keep the lake water untouched.

If everything went according to plan, the thermal bore will have stopped just above the free flowing water. Once removed, the relatively higher pressure lake water will be forced upward into the channel were it will freeze. Scientists hope to return next year and sample this frozen lake water plug, giving them their first glimpse at whatever lies beneath miles of arctic ice.

What scientists are hoping to find varies greatly. Most are certain that the lake formed when Antarctica was still a warm and it likely is a time capsule of Earth’s conditions at the time. More tantalizing is that despite the extreme temperature, high pressure, supersaturated gas content, and complete lack of light, life may exist in Lake Vostok. Some preliminary core samples taken in 2010 contained the microorganism Hydrogenophilus thermoluteolus, suggesting that there could be life down there — perhaps powered by geothermal heat.

Most exciting are t the similarities between Lake Vostok and the theorized lakes and oceans on Jupiter’s moon Europa and Saturn’s moon Enceladus. If Vostok is truly analogous to those extreme extraterrestrial conditions, and if life does exist there, then earthbound discoveries might have much larger consequences. Unfortunately, it will be at least a year before we’ll know what to expect. 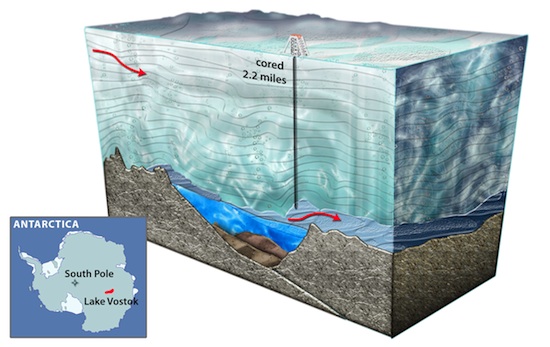 (via Gizmodo, Wired, images via the National Science Foundation and Wikipedia)