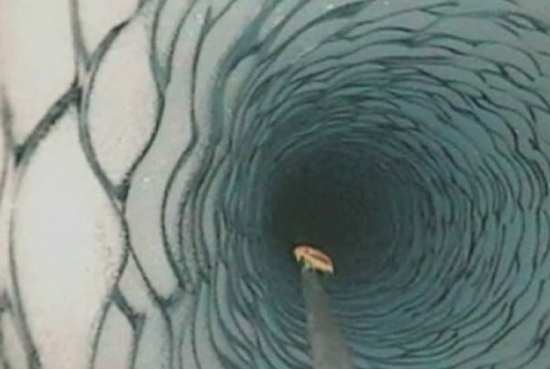 A Lyssianasid amphipod, a shrimplike creature of family Lysianassidae, was found alive by NASA 200 meters below the surface of Antarctica, along with what appeared to be the tentacle of a footlong jellyfish, the Associated Press reports.

Extremophilic bacteria living in extremely cold — or extremely hot, or extremely salty, or extremely anything — environments are nothing new, but for the Lyssianasid amphipod or any other multicellular organism to be found alive and swimming in such a hostile clime means biologists have to revise their theories of livability, and perhaps ups the odds of life on other planets:

The video [of the Lyssianasid amphipod] is likely to inspire experts to rethink what they know about life in harsh environments. And it has scientists musing that if shrimp-like creatures can frolic below 600 feet of Antarctic ice in subfreezing dark water, what about other hostile places? What about Europa, a frozen moon of Jupiter?

“They are looking at the equivalent of a drop of water in a swimming pool that you would expect nothing to be living in and they found not one animal but two,” said biologist Stacy Kim of the Moss Landing Marine Laboratories in California, who joined the NASA team later. “We have no idea what’s going on down there.”