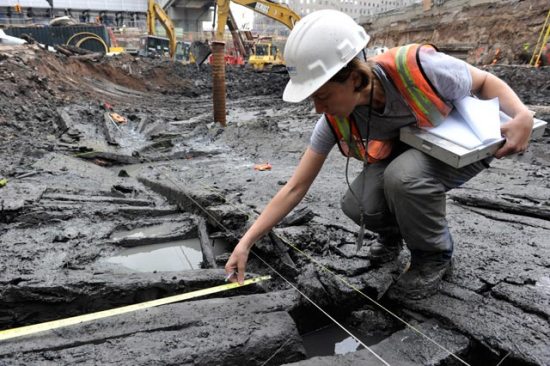 In the middle of construction work for the new World Trade Center on Tuesday, those excavating the site for the planned underground vehicle security center encountered a vehicle that had definitely not been given proper authorization to be there. Or if it had, it was over 200 years ago, and it’s probably lost clearance by now.

Excavators working at the site found, deep underground, what the New York Times describes as “a row of sturdy, upright wood timbers, regularly spaced, sticking out of a briny gray muck flecked with oyster shells.” As the unearthing continued, it became clear that this was most definitely a full-fledged ship, preserved 20 to 30 feet underground and undisturbed for a couple centuries.

As remarkable as this discovery was (the last similar find was back in 1982, when a cargo ship from the same era was discovered under Water Street), it is also an extremely delicate one. Had the weather not been so dreary and rainy, the ship would have started to deteriorate instantly from sun exposure.

So as archeologists and scholars clamored to the site, time was against them. Not only could the sun come out at any moment to start senselessly destroying the old vessel, but construction could not be stopped just for the find. Scientists and construction workers were both racing to get their work done as fast as possible in the same pit, trying not to disturb one another:

As other archaeologists scrambled with tape measures over what appeared to be the floor planks of the ship’s lowermost deck, (Doug Mackey, the chief regional archaeologist for the New York State Historic Preservation Office) said, “We’re trying to record it as quickly as possible and do the analysis later.” All around the skeletal hull, excavation for the security center proceeded, changing the muddy terrain every few minutes.

But enough about the process, what do we know about this giant boat sitting under the city? While 30 feet of hull were uncovered in the excavation, estimates place the length of the entire ship at two or three times that much. It also appears that the ship may have been rather unloved, possibly torn apart on purpose to be used for landfill. Poor ship.

But there could be a ton of facts to emerge later as archeologists get the chance to actually investigate and inspect the data they so hurriedly collected:

A 1797 map shows that the excavation site is close to where Lindsey’s Wharf and Lake’s Wharf once projected into the Hudson. So, no matter how many mysteries now surround the vessel, it may turn out that the ghost even has a name.

Its name is Robert Paulson. Here are a couple more pictures of it: 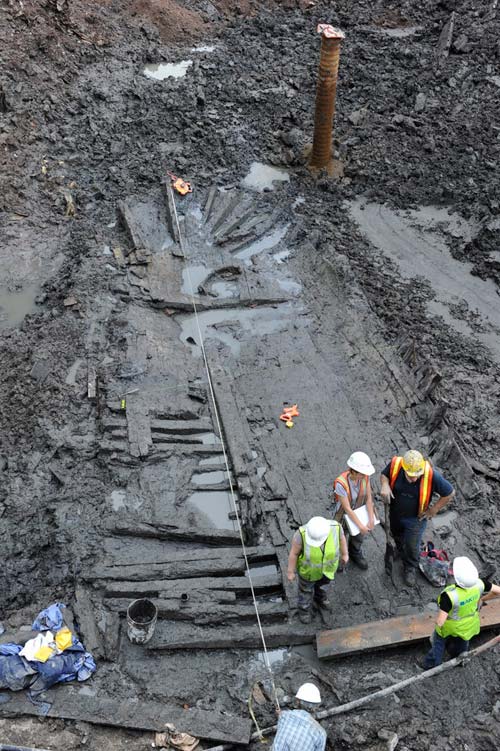 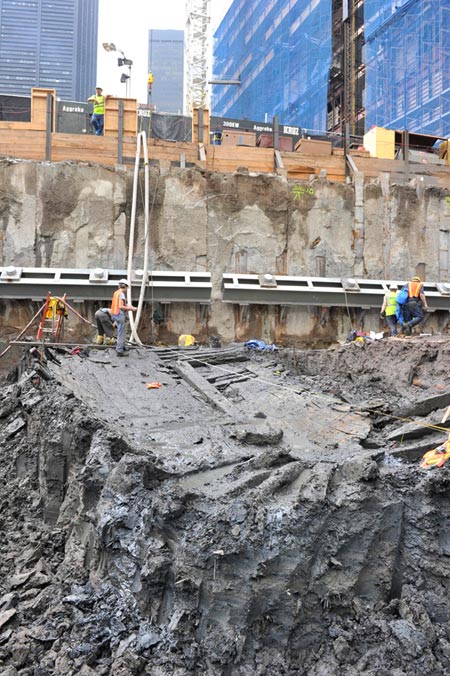 (Via The New York Times, images courtesy of Port Authority via Gothamist)