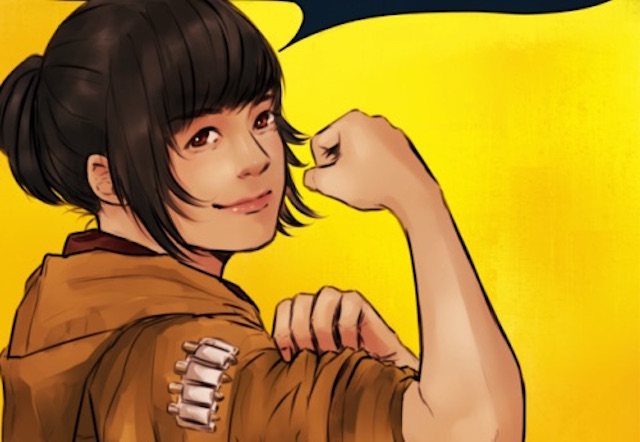 Welcome to 2018! A new year, full of new possibilities and resolutions to keep. My visual inspiration going into 2018 is this awesome artwork of Star Wars‘ indomitable maintenance tech, Rose Tico.

It’s no secret ’round these parts that one of our favorite elements to emerge from The Last Jedi is Kelly Marie Tran’s Rose Tico. Smart, resilient, no-nonsense, excellent with technology, possessing of A+ taste in men, and unwavering in her Resistance convictions, Rose is the kind of hero we needed to see in Star Wars after the long and punishing gauntlet that was 2017.

Rose’s inclusion in the movie seems to have inspired German artist the-rogstar starting way back in April, when they created a picture of Rose in the iconic style of Rosie the Riveter (who would make for a fitting namesake). I adored this art when I saw it receive many Tumblr reblogs following The Last Jedi‘s release, and the-rogstar has kindly given me permission to post it here. 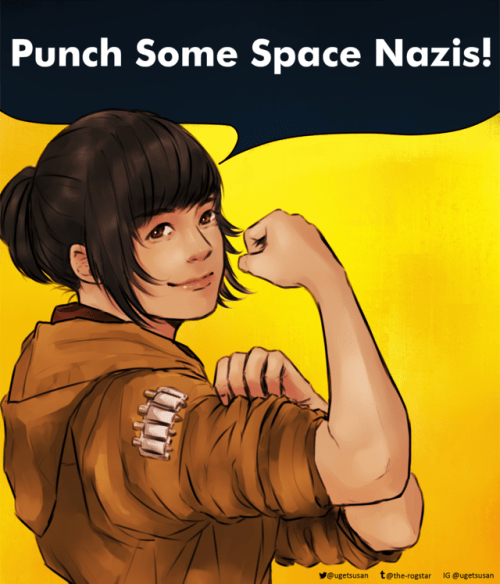 Considering the year that 2017 became, what with the tragedy and violence in Charlottesville in August and the President of the United States declaring that “both sides” of protesters were to blame—though one side were Nazis and the other side was there to not be Nazis—this art was remarkably prescient.

Then, with the Last Jedi‘s release, we saw that Rose was more than worthy of such an artistic tribute. She didn’t get to throw many punches when the Space Nazis threatened her with execution on the Supremacy, but you know she was thinking it. Punching with her eyes, if you will.

As we kick off 2018, there is little more that I want as a guiding force in my life than a poster print of this on my wall. You can buy one here, and support both Rose punching Space Nazis and the artist—plus, you’ll be rewarding yourself with a little something special to start this year off right.