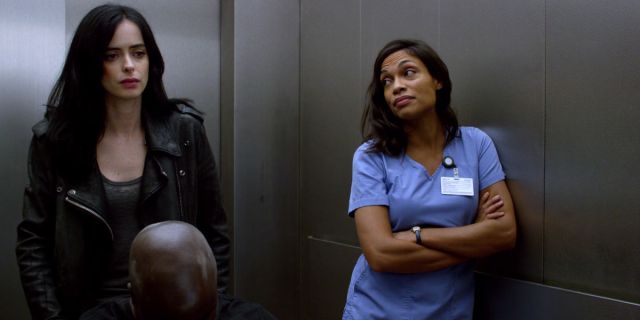 **Spoilers for Jessica Jones season 1 if you haven’t watched it yet, in which case go do that now. I’ll wait.**

If you were sad that there wasn’t more Luke Cage in Netflix’s Jessica Jones show, don’t forget that he’s got his own show coming up, and you should really just be excited! If you were sad that he and Jessica didn’t actually work things out at the end, well … you might not be as happy about Rosario Dawson’s expanded role in Luke Cage, but I sure am.

Her Marvel character, Claire Temple, featured pretty prominently in Daredevil and already made an appearance in Jessica Jones to help Luke Cage out, and it seems that the two will get to know each other even better when Luke gets his own show. In an interview with IGN, Mike Colter (Luke Cage himself), said,

She knows of me, obviously, from a personal standpoint, but it’ll be interesting to see because she will deal with me in a different way than she dealt with Matt Murdock. Matt Murdock’s character’s completely different from mine.

Because she plays a nurse that basically seems to be in the right place at the right time, and she’s very good at helping out superheroes who are in need, and I think you will see some of that in Luke Cage. Ultimately I think she’s going to be a very good companion for Luke. I think she’s someone that Luke needs in his life at this time.

But just how “in his life” will she be, considering she was a love interest for him in the comics? Maybe not that much, considering that Marvel Television head Jeph Loeb added that Claire’s role in the Marvel TV shows was expanded just because Dawson is such a great actor. Colter also had this to say:

With Jessica, it was one of those things that when you meet it’s lustful. I think with Jessica, there’s so much chemistry there that we still need to find out are we compatible, and that’s the part that’s going to be interesting. As far as Claire is concerned, we have to wait and see how that relationship evolves. Comparatively speaking, we know Jessica has killed my wife, and so we have to get through that.

It doesn’t sound like they’re definitely going in the love interest direction (which is a refreshing change of pace, to be honest), but we’ll have to wait until the show finally hits our TV screens to say for sure. We can say that we completely agree about Rosario Dawson being awesome in the Marvel TV shows, and the desire for her role to expand is mutual.

(via GeekTyrant, image via Marvel/Netflix)