Ron Swanson Has His Own Writer, Actor IMDb Page 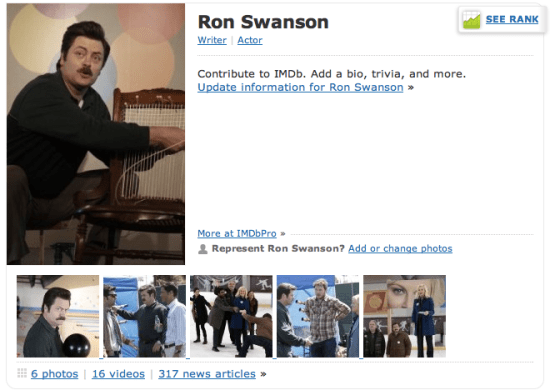 Television’s favorite manly man with a secret heart of gold, as well as a secret lust for riddles and soft jazz, Ron Swanson, has his own page on the Internet Movie Database. No, not the listing of the character that Nick Offerman plays, but Ron Swanson himself, as if he were a real life person that contributed to the movie and television industry. Interestingly, Ron Swanson’s IMDb credits end in 1996, one year before Nick Offerman’s credits begin in 1997. I mean, you’ve never seen both Ron Swanson and Nick Offerman in the same room, right?!

If you’re wondering, yes, Ron Swanson is credited under the individual works’ IMDb pages as well. Seeing as how he’s one of the best characters currently on television — a thin group of characters ever since a certain something went down over on HBO — we’re pretty happy to see him continually get his due, even if it is fake due.