All aboard the S.S. Hubris. 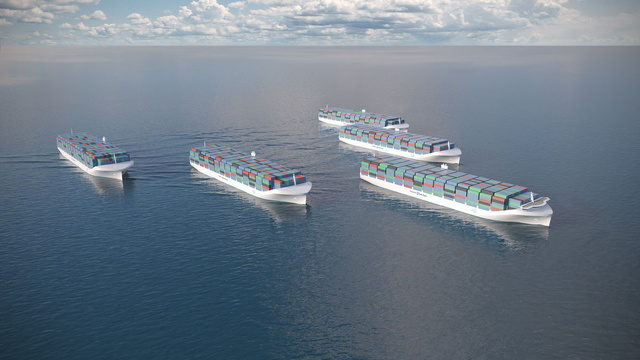 Apparently not only does Rolls Royce have a maritime division with the precious name Blue Ocean, but they also want to eliminate sailors from the high seas and change maritime law so they can launch a fleet of massive drone ships. Have at ’em, Pirates.

Rolls Royce—whose marine division apparently accounts for 16% of the company’s total profits—has been designing unmanned ships for the last year, in spite of understandably strong reservations from unions, maritime lawmakers, and Poseidon the Sea God himself.

Oskar Levander, Rolls Royce’s vice president of innovation in marine engineering and technology, told Bloomberg.com, “Now the technology is at the level where we can make this happen, and society is moving in this direction.” Society, what did we do to indicate we were ready for an ocean full of ghost ships?

Rolls Royce’s schematics show that without the crew deck usually found on freighters or the various equipment typically needed to support the crew (air conditioning, plumbing, etc.) the ships will be considerably lighter and have more room for cargo. Levander estimates drone ships would be 5% lighter and save 14 to 15% more fuel than their manned counterparts

Possibly the most bonkers part of this whole scheme? Each drone ship will still have a captain, but a landlocked one. Bloomberg.com writes that Rolls Royce already has a virtual reality prototype set up in Norway, where “captains” would have a 360-degree view of the ship’s path in order to steer from land.

Royce claims that adopting these crewless, remotely-captained naval drones could save as much as 44% of operating expenses, around $3,2999 a day for a cargo ship. But they claim their interests aren’t entirely financial (fat chance, Rolls Royce).

“It’s a given that the remote-controlled ship must be as safe as today,” Says Levander, who apparently is unfamiliar with the upcoming robot uprising.  “But we actually think it can be even much safer than today.”

Actual sailors aren’t so sure.

It cannot and will never replace the eyes, ears and thought processes of professional seafarers. The human element is one of the first lines of defense in the event of machinery failure and the kind of unexpected and sudden changes of conditions in which the world’s seas specialize. The dangers posed to the environment by unmanned vessels are too easily imagined.

Don’t worry, Heindel. The sea has a way of punishing the arrogant folly of man. (See: Titanic, Atlantis, Sharknado.) Should Rolls Royce’s newest fleet ever be approved, they will soon see how tempestuous a lover the ocean can be.

(via Gizmodo and Bloomberg.com, images via Rolls-Royce Holdings )