Private Pepperoni, reporting TO YOUR MOUTH. 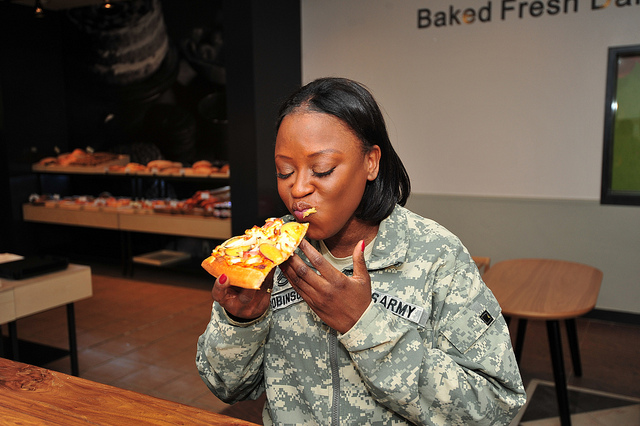 For years, U.S.  Military Labs have been cooking up technology to drastically improve the lives of soldiers in the field. After lengthy research and much anticipation, food science has finally done the impossible and created  a pizza that stays edible for years, even in hot climates. Little Caesars, you should be ashamed.

Apparently, pizza has long been a request from soldiers for their prepackaged  Meals Ready to Eat (MREs) that they survive on in the field. Making their dream a reality has been difficult though because the very stuff that makes pizza so delicious also causes it to go bad more easily than less beloved foods.

Scientists’ efforts were long thwarted because moisture in tomato sauce, cheese and toppings migrated to the dough over time, resulting in soggy pizza that provided the perfect conditions for mold and disease-causing bacteria to grow.

The mad food geniuses then changed the acidity in the cheese, dough and sauce and added iron fillings to the box to absorb extra air. And presto, Our Nation’s soldiers now have a pie that will remain fresh-out-of the oven edible for at least three years, without any refrigeration.

io9 explains that although not as crispy as a pizza taken straight out of the oven, the permanent pizza is just as tasty as a store-bought frozen one. No word on if ranch dipping-sauce will be provided, crust-eating is encouraged, or if the pizza will be available for breakfast.

(via io9, images via US Army Garrison Red Cloud-Casey )