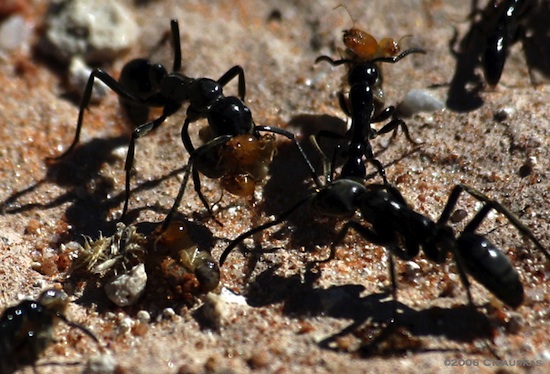 Ants do all sorts of things we think of as human activities. Some of them are kind of endearing, like keeping farms of aphids. Others remind us of our ugly side, and none more so than the work of Protomognathus americanus, the American slavemaker ant, which has evolved to stop foraging for food, and instead steal larvae from the colonies of other ant species, and then raise them as slaves. A recent study demonstrated that, unlike some newscasters we know, enslaved ants don’t take life in captivity lying down, instead working to destroy the slavemaker colony and killing up to three out of four of their captors’ children.

The rebellions, though, aren’t dramatic, Spartacus style uprisings. Instead, enslaved Temnothrax longispinous ants work more like French resistance fighters in World War II, committing small acts of sabotage against their captors. These “uprisings” were seen in colonies as early as 2009, but the latest study of the behavior, published this week in the journal Evolutionary Ecology, demonstrates that the behavior is widespread, occurring in colonies in Ohio, New York, and West Virginia.

Slavemaker ants are native to the American Northeast, where they live in small colonies consisting of one queen, a handful of scouts, and dozens of slaves. Scouts make their living sneaking into nearby colonies, stealing larvae, and bringing them back to their home to be raised as slaves. It’s these slaves who are responsible for foraging for food in slavemaker nests and caring for their young. That’s where the plan kind of falls apart for the slavemakers.

Slave ants, it turns out, resent being slaves, which is pretty natural in our book. Also unsurprising to us: Resentful slaves don’t make great nannies. Most of the ants are in good hands during the larval stage, when their slave nannies can’t really tell that the baby ants are a different species, but when they mature into pupae, the nannies know something is amiss, and can turn on their charges violently. In slavemaker colonies in West Virginia, only 27 percent of the slavemakers’ pupae made it to maturity, with the rest being killed by their imprisoned caretakers. Pupae in New York and Ohio did a little better, seeing about half of their kids stay alive, but that’s still far below the 85% survival rate of pupae in other ant colonies.

The moral of the story here? Slavery is bad, of course. Though we like to think this particular life lesson doesn’t need to be driven home among humans anymore.