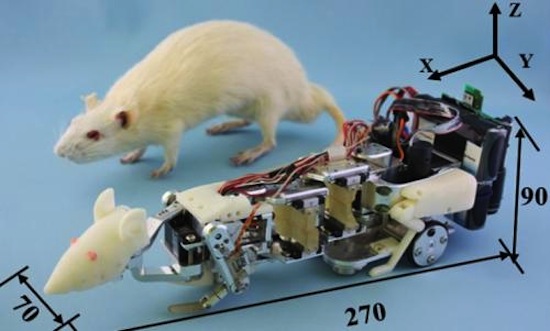 Life as a lab rat isn’t exactly great. The digs are nice and the food is good, sure, but it’s a lifetime of being poked, prodded, put through mazes, having electrodes put in uncomfortable places, and eventually probably being dissected to see what effect all those things had on your poor brain. So while we’re all for suffering in the name of scientific progress, it seems a little much that researchers at Japan’s Waseda University have created a robotic rat specifically designed only to terrorize their organic lab rats, inducing stress and depression that they can then study.

Why would scientists go to such great lengths to create a robot whose only purpose is to hurt the feelings of their lab rats? The sad truth of the matter (no pun intended) is that science needs depressed rats. Without rats that are depressed, we can’t test drugs that fight depression in rats, and find out if those compounds could have similar effects in depressed human. So unfortunately, we need a robot capable of just bumming the heck out of lab rats.

While humans can just watch the news or think about their personal relationships to bring on a fit of depression, rats are simple creatures, and harder to bum out. We have ways of depressing rats, sure — electrical shocks, for example, go a long way towards making a sadder rat — but they don’t make great models  for depression in humans. After all, if you’re sad because someone is constantly shocking you, that’s not really depression — that’s just you being right. Also, it means you probably have significantly worse problems than being depressed, though that’s neither here nor there.

So to get a more accurate model of human depression in rats, the team built a robot rat that could depress rats in the same ways we get depressed: by constantly harassing them in small ways that build to a point where you just want to punch everyone you meet in the throat. The robot can be programmed to chase or attack a rat subject, or can become its only source of food. Taken together, this program of psychological devastation leaves you with rats who just don’t even feel like getting out of bed in the morning. Which is, of course, just what researchers want. For science!

Of course, it’s not just an experiment in rodent psychology, but also a chilling picture of the world to come, in which humanity is subject to the cruel whims of our robot masters. So, at least we’re getting practice?