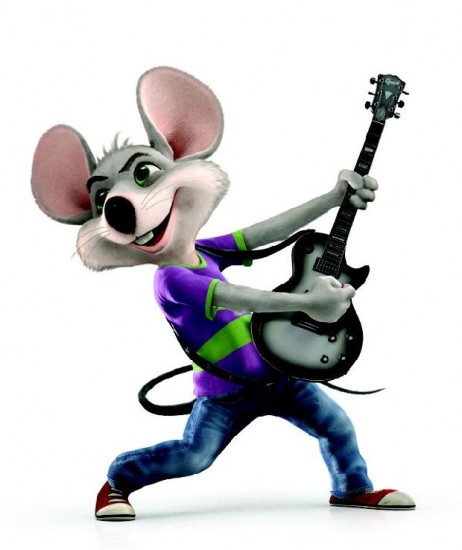 Chances are you have some opinions about Chuck E. Cheese. Whether you consider it a blast for kids, or a wretched hive of scum and villainy (or both), you’re probably familiar with both the resturant and its mascot, good old Chuck. Well, get ready, because Chuck has gotten a dramatic redesign, and is leaving the past behind. It’s quite the departure.

This is the new face of Chuck E. Cheese. He’s come a long way from a cigar-chomping New Jersey rat. Yes, Chuck is a rat, not a mouse. CEC Entertainment openly admits the redesign is an attempt to try and make up for the chain’s waning popularity by hipping up its 35-year-old mascot. Notable changes — apart from the obvious inclusion of a gutiar — include a lack of a hat, and a uniformly colored face. Previous versions of the mascot had outfitted Chuck with a derby hat, and then a baseball cap, and both previous images also features a distinctly colored snout. No more. The new, hip Chuck has a new, hip voice as well. The new incarnation is to be voiced by Jaret Reddick, the lead singer of Bowling For Soup.

The change has been in the cards for a while according to Duncan Brannan, who’s been the voice of the rat since 1993. Brannan has said that recently he’s felt as if he may have been being pushed out, but was reassured that he was still the voice of Chuck E. Cheese. According to ShowBizPizza, he only learned otherwise when he came across “Chuck’s Hot New Single” and realized someone else was singing as Chuck. CEC Entertainment has released a statement saying that Brannan has not been fired, but rather that the company “chose to utilize new voice talent.”

All told, this seems like a pretty serious departure from the old mascots, but if the franchise is going to survive, that might be exactly what’s needed. Surely, the redesign is going to require updated signs, mascot costumes, and animatronics (do they still do the animatronics stuff?), so this is a pretty serious commitment. Then again, considering the restaurant’s struggle to maintain cultural relevance — and possibly to maintain solvency — it doesn’t come as too much of a surprise. If it wasn’t clear before, this redesign makes it crystal: You are now too old for Chuck E. Cheese. Whether that’s something to lament or celebrate is up to you.

(Bottom Line via The Retroist)