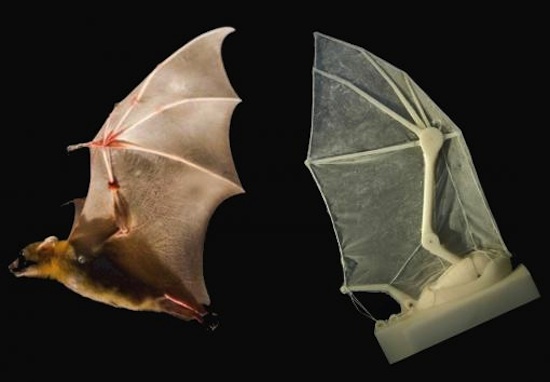 Roboticists at Brown University are one step closer to the dream of a building a robotic bat, and it’s an important step — they’ve developed a robotic bat wing, without which a robotic bat would be nothing more than a robotic mouse, which I think we can all agree would be pretty boring. I mean, sure, right now, the wing is mostly only good for learning more about the aerodynamics of bat wings and demonstrating how bat flight works. But why would you want to know that unless you’re planning, at come point down the line, to build a robotic bat? There’s no good reason to have that information otherwise! Learn how — and why — one builds a bat wing and get a look at how it compares to the real thing in the video below.

While the wing isn’t identical to the natural wing of the lesser dog faced bat on which it is based, it is close enough to provide valuable points of reference on how bats fly, and as a robot rather than a live bat, it’s much easier for researchers to work with, as it is not constantly terrified and confused, like we imagine a real lab bat would be — and not without cause.  The Brown team published a paper describing the robotic wing and offering the details of preliminary tests on it appeared this week in the journal Bioinspiration and Biomimetics.