Risk, the Board Game, Is Going to Become a Film 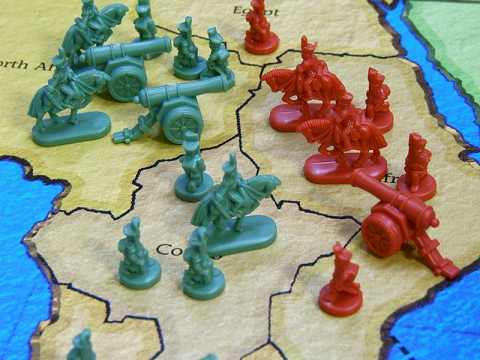 The board game-movie craze will not end with Candyland, so let’s brace ourselves: It has been announced that a screenwriter has been hired to write a screenplay based on the classic Parker Brothers board game Risk. The game, which was created by a French film director in 1957, has the objective of gaining worldwide domination through the conquering of nations. And that sounds like it would be an incredibly long movie.

According to The Hollywood Reporter, the screenwriter hired by Columbia Pictures to take on the task of successfully adapting an epic board game about world domination is John Hlavin, who was asked to write “a contemporary, globe-trotting action thriller.” Previously, Hlavin was a story editor on FX‘s The Shield and wrote the screenplay for the fourth Underworld movie.

But for a moment, let’s look at board games that have turned into movies (or are getting ready to): Clue was a huge success, but the game itself was like a interactive mystery novel. And mystery novels can be naturally adapted into screenplays. It was also a comedy. But something like Candyland, which has a movie in development and is being described as “Lord of the Rings, set in a world with candy,” or a “King Lear-like civil war” … that’s just heading into the Territory of Weirdness. As in, they might not realize they’re talking about a Candyland movie.

Created during the Cold War era by director Albert Lamorisse, Risk is a strategy game that has come out with numerous spinoffs, including ones that are Lord of the Rings-, Star Wars-, Transformers-, and Narnia-themed. If we can speculate on anything about this movie, it’s that there might be blue guys and red guys.

(The Hollywood Reporter via Screen Rant)