Will Ricky Gervais Have A Major Role In The Muppets Sequel? | The Mary Sue

Will Ricky Gervais Have A Major Role In The Muppets Movie Sequel? 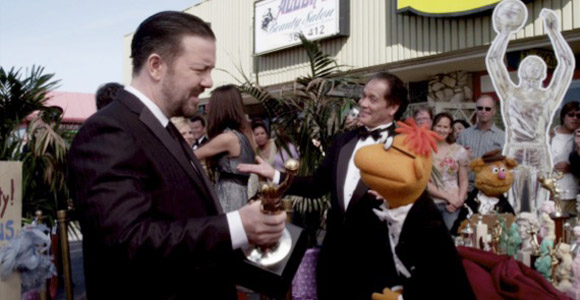 British comedian Ricky Gervais is in talks for the upcoming sequel of The Muppets! But who would he play? Hit the jump to find out!

We previously brought you word of Inglourious Basterds star Christoph Waltz in talks for a role. It’s not the same one Gervais is up for and actually wound up going to Modern Family actor Ty Burrell instead.

Burrell will play an Interpol inspector in the sequel which finds the Muppet crew in Europe. The Hollywood Reporter writes, “Gervais, however, would play the lead — as much as one can be a lead opposite Kermit, Fozzie and Miss Piggy — with his stature being compared to the role played by Jason Segel in the 2011 movie.”

The script, by James Bobin and Nicholas Stoller is still under wraps but songwriter Bret McKenzie will be returning to do the music.

Gervais and Burrell are two of three main human roles said to be available for this film but we can expect tons of all-star cameos throughout. Gervais actually filmed one for The Muppets but it was left on the cutting room floor. THR writes, “If a deal is made, the role would be Gervais’ first feature lead since the 2009 comedy The Invention of Lying.”