Girl Fight: A Documentary About Women Kicking Ass/Each Other | The Mary Sue

Review: Girl Fight: A Muay Thai Story Is a Surprisingly Personal Story of Women Who Kick the Crap Out of Each Other 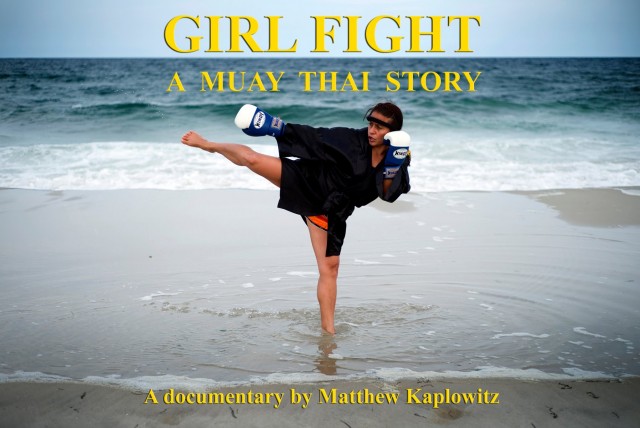 Don’t let the title fool you; Girl Fight is the name of an all-women Muay Thai kickboxing gym in Seaside Heights New Jersey, and the documentary of the same name kicks as much ass as the kickboxers in it at showcasing everyday women breaking gender stereotypes just by doing what they love to do.

Director Matthew Kaplowitz, an MMA (mixed martial arts) enthusiast, began work on the documentary after reading a magazine article on the Girl Fight gym and its owner/operator, Prairie Rugilo. At the outset, Kaplowitz writes on the movie’s website that he didn’t know where the project was going, and in my opinion, that wound up being on of its greatest strengths.

Being that the focus of the film is an all-women kickboxing gym that trains amateur kickboxing competitors, it would’ve been easy to fall into discussion of what fighting in the ring is like for men vs. women, as so often happens when trying to present a look at “women in [x] field” or “women who do [a thing society insists on associating strongly with men.]” Not that that conversation is entirely absent or even should be, but there’s a fine line there between being supportive and patronizing that a lot of the media generally fails at—surely I do at times as a man writing from a generally feminist perspective.

However, Girl Fight does an excellent job avoiding that problem by letting the subjects’ lives lead the story. Splitting its time pretty equally between daily life and competition, the documentary follows Rugilo, Jaime Philips, DeAna Mendez, and more of their gym mates and opponents their workouts, competitions, and even the effect hurricane Sandy had on the area of Seaside Heights, the gym, and their lives.

Kaplowitz also wrote, “As I got a few months into filming, the real tale began to blossom. This was not going to be a movie about a bunch of fights, but a movie about overcoming obstacles, gaining confidence, and realizing self-worth.”

Of course, that’s not to diminish the importance of making sure that the story is at least somewhat about how there are women out there training and competing like the competitors in the movie. Sure, there are famous, professional women who fight MMA, and they’re awesome and inspiring, but it’s helpful to the every day woman or girl to see that it’s a viable hobby or goal even if you’re not planning to make a career out of it—especially when society tends to make such a thing seem ridiculous.

These are real, every day people who are right out there in our backyards—really, they drive right by my parents’ house in Lavallette, NJ at one point. Even though I’ve been into martial arts for years myself, I never knew Girl Fight was right there, and that’s what makes the daily life aspects of the film—the ones like the Sandy aftermath—that might not be directly related to kickboxing so relevant: People only know that participating in a fight gym like this is an option for the every day person if someone tells them so.

I’d absolutely recommend the film to anyone who has even a passing interest in competitive martial arts as a sport or hobby, or if you’ve got a little one at home—but not too little, this is a combat sport, after all—who could use some positive role models.

The movie itself is finished with only minor adjustments left to be made—as you might have guessed when seeing a review of it—but Kaplowitz has taken to IndieGoGo to secure funding to get it ready for prime time including getting DVDs made, theater-ready sound mixes, and more to promote and get it out there in front of audiences.