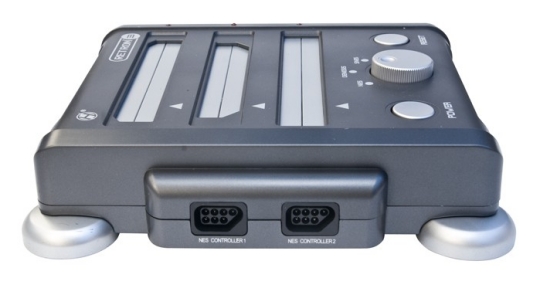 You kids can all get excited for the PlayStation 4 and the next Xbox, but I’m pumped for this thing. Hyperkin has announced their RetroN 4 console that plays NES, SNES, Game Boy Advance, and Sega Genesis cartridges, though sadly not all at once. It’s an upgrade from the RetroN 3, and besides adding Game Boy Advance games into the mix, Hyperkin has made a few additional improvements. It will be like a fifth grade sleepover every day of your life.

The biggest upgrades to the RetroN 4 are the inclusion of HDMI output and the redesigned Bluetooth controller, but if you’re a purist the system also features two controller ports for each system it pretends to be. The RetroN will also feature a digital user interface called “Perdana” allowing users to remap controller buttons, switching between systems, and more features Hyperkin promises to announce later this month when the system is officially unveiled on March 23rd as part of the Midwest Gaming Classic in Brookfield, Wisconsin.

We have had great success with the SupaBoy and RetroN 3, and we wanted to create an entirely new console that has the modern amenities that will allow users to utilize current technology. As this is an ambitious project for Hyperkin, our goal for this system is to combine modern gaming convenience to not only cater to the retro gaming community, but to also introduce a new generation of gamers to the classic games that have shaped the present gaming landscape.

I’ve played a few retro consoles like this, and they’re a little hit or miss. This could very well be due to the age of the games, but it does bring back the good old days of blowing in a cartridge to get it to work. For someone like me whose interest in gaming peaked years ago, the RetroN 4 offers a pretty convenient way to be able to play the games I love, and even some I hate but still haven’t beaten since childhood — I’ll get you yet, Battletoads.

It’s worth noting the cover image to this story is actually the RetroN 3, since the RetroN 4 hasn’t been revealed yet, but I’m sure we’ll see the actual console when Hyperkin reveals it at their big event on March 23rd, because that’s what you’re supposed to do when you have a console event, Sony.