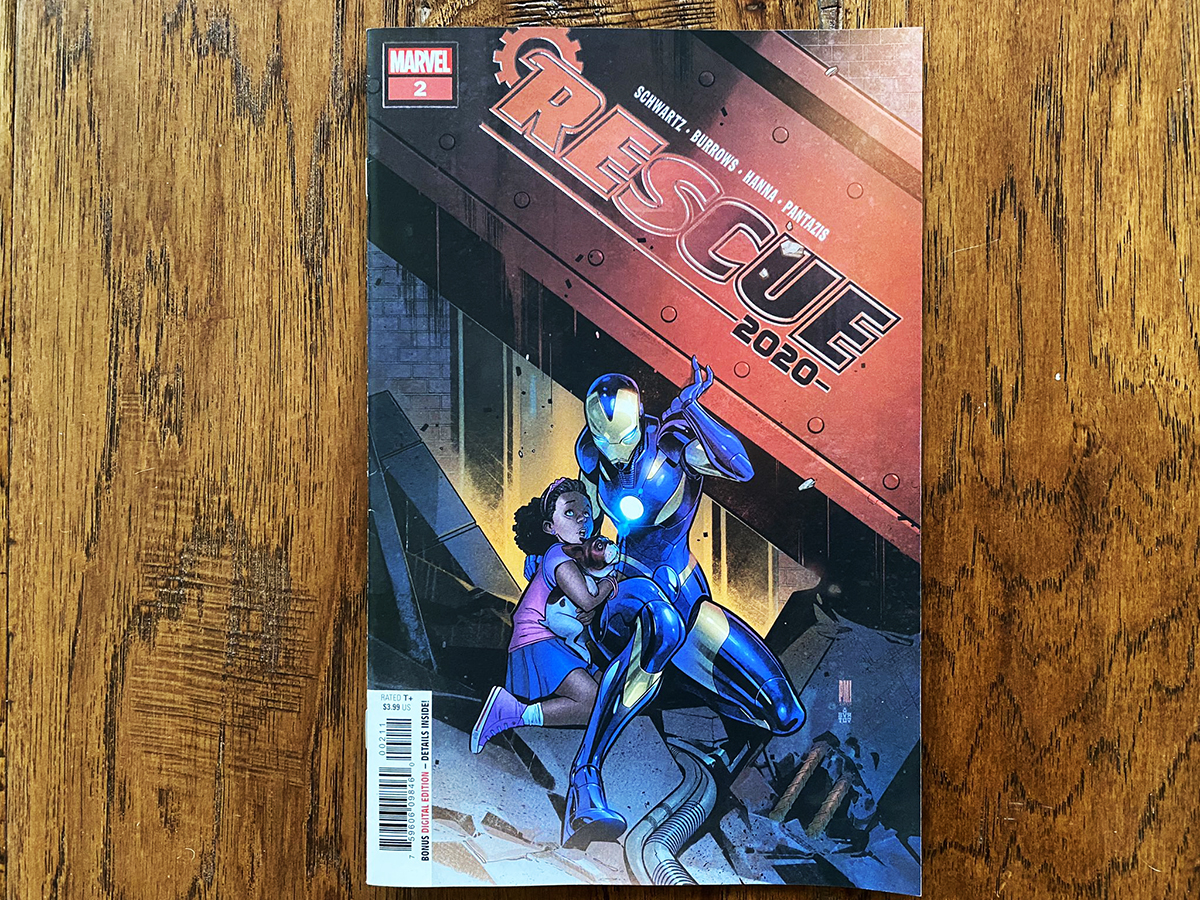 Marvel’s latest Rescue 2020 issue takes us inside a Hydra facility so Pepper Potts can continue her quest to revive Tony Stark. In the first issue, we saw Pepper come in contact with Tony’s birth mother, and now she must face off against Hydra to get to Jude, his birth father.

Something that the Marvel Cinematic Universe never really touched on was the comics storyline where Tony Stark is the adopted son of Maria and Howard Stark. Hiding their ailing biological son, they adopt Tony, and he is positioned as their son for the world to see. In the Iron Man 2020 series, Tony Stark is an A.I. who is leading the robot army against Stark Unlimited (run by the Starks’ biological son, Arno Stark) and Sunset Bain (who has merged her tech company with Stark).

Knowing that the Tony Stark she once knew and worked for his dead, Pepper learns that collecting DNA from both of his birth parents can bring back the human Tony Stark and makes it her mission to save Tony. In the second issue, she goes to find Jude, who works for Hydra and believes his son wants him dead. We learn a lot about Hydra’s ideas (and see how they’re attacked by their own technology), but we also meet some characters who willingly help Pepper while she’s trying to get out of the Hydra base to help Tony.

There is a character who goes by the name of Robbie Fleckman, who is essentially a Hydra intern who gets the coffee orders wrong, and when they are demonstrating the power of their new robot, it turns on the man demonstrating it and attacks him. Robbie, in his luck, is fine, but Robbie is also the worst.

This comic also has maybe my favorite character I’ve created, a low-level Hydra agent named Robbie Fleckman who 100% would troll me on twitter and make mean youtube videos about me if he were real. pic.twitter.com/1usz3l0iXP

Written by Dana Schwartz with Jacen Burrows as the penciler, Rescue 2020 is, honestly, a refreshing break in the 2020 series from Marvel. As we can see with the Iron Man 2020 series, it is a dark world filled with destruction and war, but getting into the Rescue 2020 portion of the series brings a beautiful sense of hope.

Pepper Potts puts on the Rescue suit and does what she has to for her friend. Rescue’s journey isn’t against the war, and she isn’t even really there to help those who have set themselves up for failure (as we can see in the second issue when she refuses to really help Hydra from their own creation).

But even when she can walk free, leaving Jude and even Robbie to the destruction of their own making for working with Hydra in the first place, she still helps them and stops the robots from attacking them—not without getting what she came for, though.

It’s going to be interesting to see where Pepper Potts goes next and how her collection of DNA helps to bring Tony Stark back to life, but I’m, at least, extremely invested in where this story (and the war against the A.I. and the corrupt Stark Unlimited) is going to take us.