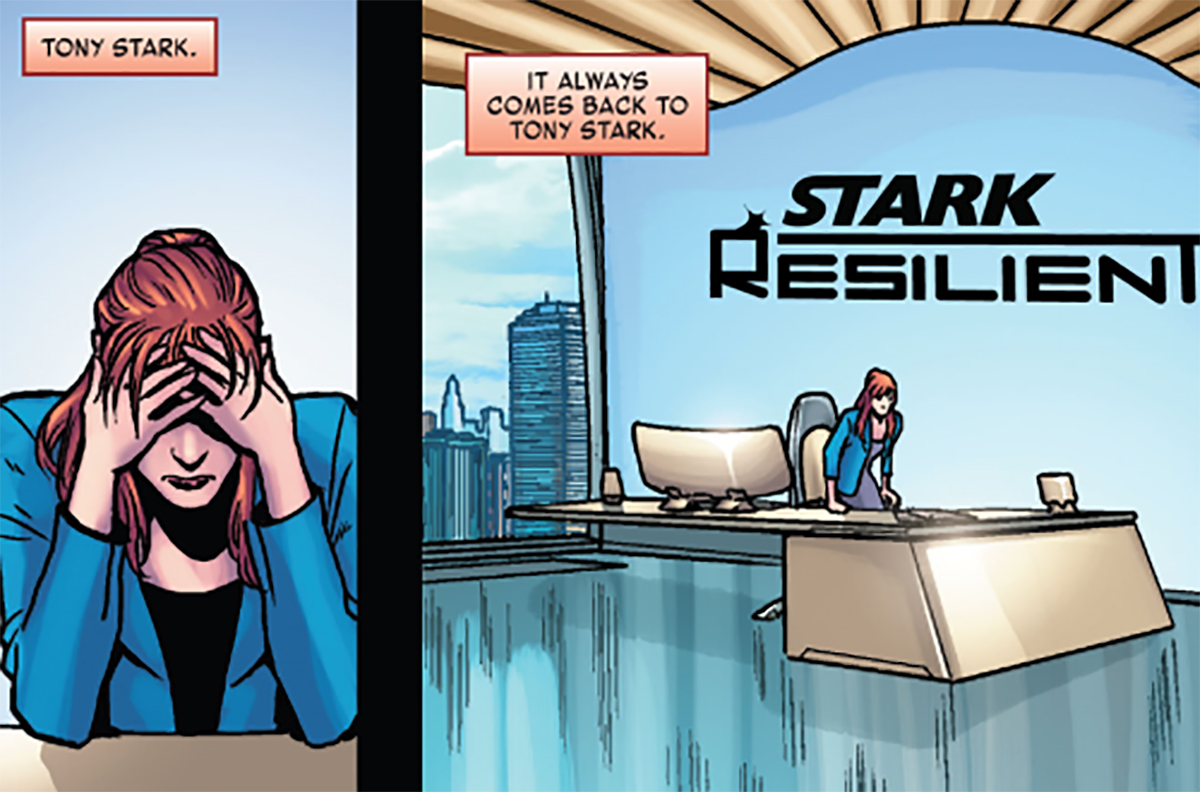 A companion piece to Dan Slott’s Iron Man 2020, Rescue 2020 is a beautiful look at Pepper Potts in a way that we’ve never really gotten to see her before. While she’s been a part of Tony Stark’s story since the ’60s, she’s gone through many changes throughout Marvel comics. Sometimes a love interest, often happily married to Happy Hogan with children, Pepper Potts just recently became a different kind of superhero as she took on the mantle of Rescue in 2009.

Now though, Rescue has a different mission: bring back Tony Stark. When the world needs Iron Man, Pepper has to once again put her life on hold for the man she believes in, even if he’s constantly the reason why something in her life is going wrong. In one of the best panels of the first issue, we can clearly see Pepper continually being praised as a young girl going into her life of being overshadowed by Tony Stark.

A brief glimpse into the life of Pepper Potts, then and now: pic.twitter.com/aTpQiZdtOi

What I really love about the series is that Pepper isn’t bitter about being constantly connected to Tony. Instead, she pushes through it (like so many women are forced to do) and uses her strength to stand for what she believes in—which, in the end, does happen to be Tony.

Talking briefly with writer Dana Schwartz, I asked her what the hardest part of writing for Pepper (and Rescue) was. She told me,

The biggest challenge for the story was having so many pieces already in place to dovetail in with Dan Slott’s Iron Man 2020 run: We knew where this story began, and where it would end. And so I just wanted to create as many small human moments as I could in the middle, and give Pepper Potts the stage in the comics that she hasn’t really gotten!

For so many, their idea of Pepper exists within the films of the Marvel Cinematic Universe or Tony Stark’s assistant that marries Happy Hogan, but Pepper Potts is more than just an employee of Tony Stark, and that’s never been more clear than in Rescue 2020.

When Pepper and Bethany Cabe need DNA from Tony’s biological parents, Pepper dons the Rescue suit to find Amanda Armstrong, Tony Stark’s birth mother. For those unaware of the comic world of Tony Stark, there are many different versions of the connection between Tony and Howard and Maria Stark.

In some, he’s their adoptive son, as in the world of Iron Man 2020 and Rescue 2020, and thus, Pepper must find Amanda, a former S.H.I.E.L.D. agent, to try to get a strand of her hair. The problem? Amanda has long since said goodbye to the man she thinks of as her son and does not want to help.

But the moment that got me, that captured my whole heart and made me wish issue #2 was already out, came at the very end, when Pepper is talking with Amanda after having fought off Hydra drones.

“I believe in people. Do you know why I’ve given so much of my life to Tony Stark? It’s because I believe in him,” Pepper says, watching as the ambulance prepares to take Amanda away. And in that moment, Tony’s birth mother gives Pepper her DNA not because she wants her son back, but because, as she says, she believes in Pepper Potts.

It’s an incredibly important message because, so often, our female characters, who often began their runs as the secondary characters to men, continue to dedicate their time and energy towards said men. But to see Amanda Armstrong saying “I believe in Pepper Potts” is emotional and sets up a beautiful tone for the rest of the series, and I can’t wait to see what happens next.