Renee Montoya Is Probably Not the Question in the DCnU 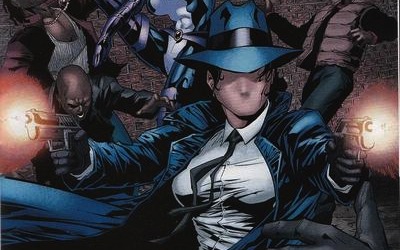 Take a deep breath and say goodbye to one of the DC Universe’s most kickass lesbian superheroes. DC Co-Publisher Dan DiDio has been answering fan questions about the reboot lately on Facebook, and according DC Women Kicking Ass, finally addressed the question: “Is Renee Montoya still the Question and is Vic Sage still dead?”

Renee will be seen as a member of the Gotham City Police Force.

What are my feelings on Renee? Other than that she’s my cosplay of choice, should I ever finally get the money to put towards a really nice trenchcoat and hat; that she’s got a special place in this Latina’s heart, as a female Hispanic character; that she was part and parcel of my introduction to a lifelong love of Batman, when she was created to add gender and racial diversity to Batman: The Animated Series; and that her character represents and is tied to everything that I love most about the Gotham setting, specifically when writers use it to talk about regular people dealing with paranormal or superheroic events?

Well, lets just look at what I wrote in our 10 Badass Gay Characters Power Grid:

In Gotham Central Renee became a fully rounded character, one of the series’ leads, and she was outed as a lesbian by Two-Face (this was actually much creepier and serious and less silly than it sounds) in the second story arc. Her parents disowned her, her coworkers began throwing slurs around, a few story arcs later her partner was nearly implicated in the murder of a villain because of a crooked cop, she was briefly invaded by the freed spirit of the Deadly Sin of Rage (the series’ only brush with the DC maxi-event of the time), her girlfriend left her because of her ongoing anger management problems (stemming from her possession, which no superheroic character was on hand to explain or fix), and her partner was murdered by the aforementioned crooked cop, who walks off scott free. In light of all this, Renee quit the GCPD, unable to serve and keep her sanity at the same time.

So when Greg Rucka came back to her for 52, the same series that reintroduced Batwoman as canon, Renee was in a particularly deep, dark hole. Her partnership with [Vic Sage] and subsequent succession as The Question was one of the better plot threads that wound through the year-long story, and it took brought Renee from “slowly drinking herself to death” to “badass vigilante taking down international drug cartels.”

Those are my feelings on Renee as the Question: she’s a character with an arc, carefully crafted by Greg Rucka‘s efforts to keep putting her in continuity. Now that he’s no longer at DC, it doesn’t seem like anyone is willing to carry the torch.

There are probably some folks who are already saying “Hey, he said she’s still a character, they aren’t just putting her out of the universe,” and yes, that’s certainly something to be grateful for. But she’s no longer going to be a superhero. (DiDio’s statement could be seen as crafty misdirection, but that doesn’t seem to be his intention.) A cop in Gotham city has no chance of getting a title of their own. A cop does not get their own supporting characters or their own story lines (honestly, there used to be a small chance of these things, but, as I mentioned, Greg Rucka no longer works at DC). They get to be supporting characters in other characters’ story lines and titles, reinforcing an idea that we can have racially diverse, gay or female characters, but they’re not going to be playing central roles.

Moving Renee back to her police career also raises questions about where her character development is being moved back to. Is Renee against closeted? Is she out of the closet but in the miserable hole that her outing left her, harassed in the GCPD and disowned by her parents; without any promise of the catharsis of finding a new purpose as the Question? Is she out and not miserable, denying the DCU a very important thing:

Diversity within its portrayals of gay characters. Let’s look at our Power Grid again:

While [Batwoman’s] coming out was made from a place of deep integrity and cost her a career that was everything to her, she never risked her extremely privileged place in society or her family’s love. When Renee berated Kate to go back to school, stop being a waste of space, and make something with the gifts she had been given; Kate would deflect the issue by accusing Renee of living a lie as “Officer Montoya” and assume an air of superiority because at least she was being true to herself, sidestepping the fact that Renee had much more at stake in revealing her sexuality. This was a younger Kate with a lot of personal development to go through, for what it’s worth.

But these are the kinds of things that are possible when minority characters aren’t just tokens but valued additions (thanks, Mr. McDuffie): writers can actually explore the fact that different people approach their minority status in *gasp* different ways.

Goodbye, Renee!Question. Hello again to Detective Montoya, I hope to see you soon in Batgirl, eventually Batwoman, or maybe even Detective Comics.