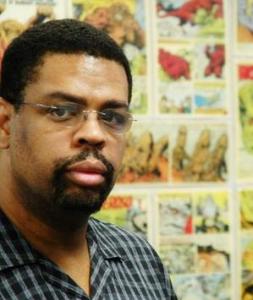 Dwayne McDuffie, writer of comics, movies and television; and crusader for minority representation in mainstream superhero comics, has died due to surgical complications.

You might not be familiar with McDuffie’s name, but if you’ve been reading comics or watching superhero cartoons for the last couple of decades, you’ll be familiar with his work.  McDuffie began his career at Marvel with comics like Damage Control, worked freelance for both of the Big Two for a few years, and then, fed up with lack of minority representation outside of tokenism in superhero comics, he founded Milestone Media to help fix the problem.

If you do a black character or a female character or an Asian character, then they aren’t just that character. They represent that race or that sex, and they can’t be interesting because everything they do has to represent an entire block of people. You know, Superman isn’t all white people and neither is Lex Luthor. We knew we had to present a range of characters within each ethnic group, which means that we couldn’t do just one book. We had to do a series of books and we had to present a view of the world that’s wider than the world we’ve seen before.

The characters overseen by McDuffie’s at Milestone included Static Shock, a character who has since received his own cartoon show (with much involvement from McDuffie) and been incorporated into regular DC canon. His television credits include Static Shock, Teen Titans, Justice League (where he convinced the venerable Warren Ellis to write a memorable episode), and Ben 10.

Below, in a letter showcasing his sense of humor as well as his sense of outrage, McDuffie schools his Marvel coworkers on proper racial representation. 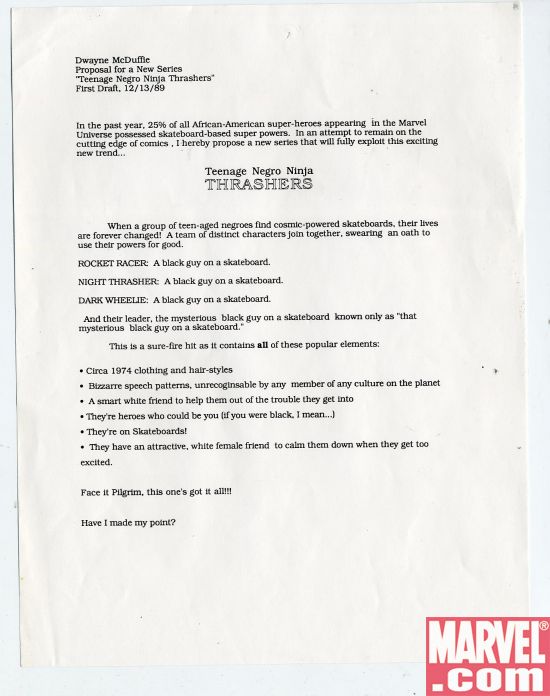 Dwayne McDuffie’s efforts and contributions to American superhero comics have touched many people without them even being aware of his existence, and while the fight to raise the standards of minority representation in comics is still going on, his accomplishments will not be forgotten.