Reddit Bans Quickmeme Thanks to AdviceAnimals Moderators | The Mary Sue

Should have asked Advice Dog first; he'd have told you this was a bad idea. 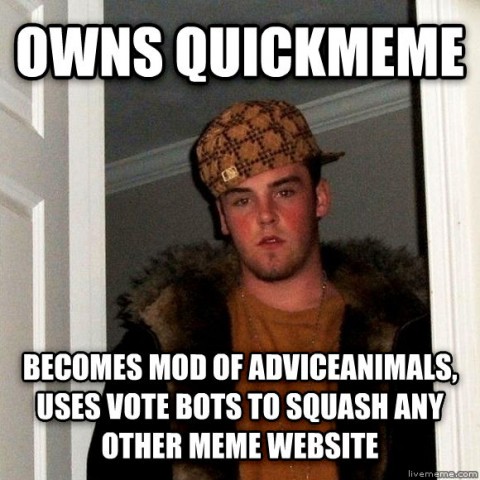 I don’t spend a whole lot of time on Reddit, but even I know that Quickmeme and Reddit seem to go hand in hand pretty recently — or at least, they used to, because now Quickmeme has been banned across the entire site for using bots to manipulate the upvote/downvote system so that their hosted memes come out on top. In short, you can’t fool Reddit forever.

According to the other moderators of r/AdviceAnimals, one of their fellow mods, gtw08, was found to be a username owned by either one or both of the brothers who created Miltz Media, the parent company of Quickmeme. After a little bit of digging, it became apparent to mod ManWithoutModem that this username was being used to market other sites owned by Miltz Media, such as Holypants.com, Webtoid.com, and Mydrunktxt.com. All the domains of these sites were registered under Thomas Miltz, one of the brothers in question.

Now, that’s enough to make Redditors mad in and of itself, as the prevailing culture surrounding the site is extremely anti-marketing — but it only gets worse from there. Mod jokes_on_you found a number of bots that would upvote any meme hosted by Quickmeme and downvote any meme found anywhere else on r/AdviceAnimals. As jokes_on_you elaborates on their findings:

Submissions in the morning US time get the most views because they are on the front page during reddit’s most active period. So it is the best time to use vote bots. If a post does not get enough upvotes in /new, it will never appear on the top posts of the last hour, preventing it from ever reaching the front page. So 5 or 6 downvotes completely destroys a post’s chances of being seen by a large audience.

gtw08 has since been shadow banned, which is sort of like being stuck in the Phantom Zone in that you can observe everything going on around you but can’t actually interact with anyone. It’s also now impossible to submit a Quickmeme link, so even if you ignore the giant warning and try anyway, you get this:

Of course, there’s already a number of competitors to come out of the woodwork in Quickmeme’s wake. Livememe seems to be the most popular, and because it’s Reddit, some are theorizing that this was all an elaborate ploy by the creator of Livememe to put the creator of Quickmeme out of business. Normally I’d say this is ridiculous, but Reddit seems like a pretty ridiculous place. It’s like Camelot that way, but not just a model.

According to The Daily Dot, Quickmeme supposedly commented about the ban on its blog, but the link now takes you to a broken page. Maybe they’re pulling a Paula Deen on us and revoking their apology before we have time to get sufficiently mad at it?

(Reddit via The Daily Dot top image via jokes_on_you)