The Top Ten Geek Girls From Television | The Mary Sue 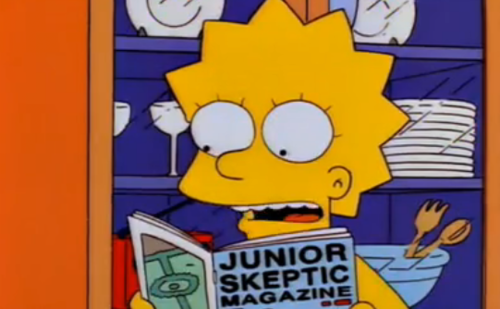 It’s nice to be a television viewer with lady parts in modern times. The rise in the number of female characters over the past few decades has been precipitous; not only that, the shows have increasingly shown these women outside the home, toiling at careers and, in Liz Lemon’s case, using dresses as ham napkins. And with the escalating boldness of writers in depicting women of all stripes, colors, and flaws as primary characters, the geek girl contingent didn’t suffer for lack of great characters. Over the last twenty years, women have been allowed access to geekery, heretofore the sole province of greasy nerds in basements, giving those of us with non-traditional passions a voice and a venue. Hey, sure, we could always use more – but until the next great lady hacks her way into our hearts, here’s a rundown of the 10 best geek girls from television.

If one definition of a geek is someone who relates academic or other intellectual pursuits to the practical world, Leslie Winkle is your girl. Once, unable to find a knife to cut up her banana, she encased it in liquid nitrogen and broke it to garnish her cereal. Predictably over the top on a predictably over the top show, but you’ll admit it’s got a certain finesse to it. She’s better than the show’s conceit of “geeks meet hot girl”, as well, but her short time as the other main girl character on the show was a nice display of smart meets snark.

I originally was going to leave Ms. Scully off this list with a stern N.B. that simply being loved by geeks doesn’t make one a geek. But then, at the clamoring of several friends, I reconsidered my errant ways on a few points. One friend pointed out Scully’s inside jokes with her father re: Moby Dick. Another pointed out her construction of ships in bottles. Yet another pointed to her love of magic tricks. To this I say, fair enough. But Scully works very hard to hide this geekery, thus the image presented to we the viewers 95% of the time is one of the utmost prepossessed cool. And her love of medicine is decidedly a mainstream bent. True Geek Status on this show belongs to the Lone Gunmen, I’m afraid – but credit where credit’s due.

Kaylee’s on this list because she typifies the definition I always use for a geek: “A person with a devotion to something in a way that places him or her outside the mainstream.” If that isn’t Kaylee Frye, then no one is a geek. Her nigh obsession with the ship Serenity and its mechanical health would border on the crazy side if she weren’t just so damn adorable. And the adorable factor is what places her further down on the list: sometimes, Kaylee has a little of the “girl in a boys’ club” syndrome. 30 Rock came out against the sexy baby act recently, K, and you should fall in line. She sometimes feels like a man’s version of what the best girl possible might be – hot, into sex, and able to fix a car. It’s a testament to the show Whedon didn’t put her in tiny, grease-marred cut-offs.

There’s not much more to be said about Lisa Simpson that hasn’t been said already. Lisa is an emblem of geekitude, though her devotion is often insulted or ignored on the show. But perhaps because of that, Lisa’s emerged as the mascot for the downtrodden geek who rises above the showy philistinism of her family. And she may sort of be a stick in the mud, true – but hey, even she can kick back and enjoy Itchy and Scratchy. A 24/7 intellectual is a sorry geek indeed.

Who could forget Chloe’s perfectly dismissive answer and prideful half-scowl when roughly asked by a CTU field agent if she had a gun: “I work with computers.” When 24 sogged beneath the weight of the same-old shoot ‘em up, white-Texans-are-the-bad-guys-in-the-end plotlines, Chloe was always there to add a little spark to the proceedings. She was fierce. She was annoyed. She swore a whole lot. Later, she became a mother – and she didn’t give up being awesome at computers and defeating terrorists. That’s always nice to see.

Cynthia “Mac” Mackenzie is a geek who, from the outside, you can sort of check off the standard requirements. Into computers? Check. Brash anti-social humor? Check. Helpful to a main character, arguably more appealing than herself? Check. Some marker of physical appearance differing her from “normal” girls? Check, in the form of colored hair streaks. But Mac makes exceptional what could be constraints in another. She’s witty, and hurls her barbs justly and expertly. She’s self-serving, as we saw when she created the purity test that swept Neptune High, in order to pay for a new car and keep her flush in Apple gadgets. She’s got a sexuality, too, that is treated as a normal function of her relationship, and rounds out her character. And the episode where Mac finds out she was switched at birth? Could have easily descended into cliché, but due to Majorino’s talented self (a Deb no more) and a great writing staff, it was one of the best episodes of the show.

If geeks had a bad-ass emissary, Toshiko would be it. Tosh is the Nikita of geeks; when she was young, she stole plans from the British Ministry of Defence like a boss, then began working for the Torchwood police force to get out of the resultant prison sentence. In addition, Tosh has a ton of steamy affairs that indicate a fairly fluid sexuality, not presented for titillation, but rather for individual pleasure. Over her time on the show, she was briefly telepathetic, shut down an alien experimentation facility, and died saving London from a nuclear explosion. Rest in peace, Tosh, you died a hero’s death.

Sort of hard to leave Codex out of this roundup, despite The Guild not having ever technically been on television. Felicia Day’s web series brainchild, the World-of-Warcraft-playing recluse, is an odd duck to be sure. Day, a recovered addict herself, has quite a bit of personal experience invested in this character, and it shows. She’s frustrating in her multiple surrenders to a strange and intrusive houseguest, she’s aggravatingly self-pitying, but, all told, she’s kind. Hard to find a truly kind geek these days. Even so, Codex herself isn’t that remarkable – but Day is, and she deserves accolades for getting this character out there in the web medium when the networks panned the idea.

If you’re not watching iCarly, well… you’re probably over ten years old. Which is fine for you, I guess. But some of us are having an awesome time with Carly Shay, whose web show regularly draws over thousands of viewers per episode. (And iCarly itself isn’t doing so badly – drawing on average 5.6 million viewers an episode, even beating Hannah Montana.) Carly is exactly the role model that tween girls aren’t getting in the spoiled Hannah and others – she does her homework, she loves her big brother (so do I, if you’re adding up my creep factor points at this point), and she runs a burgeoning business in her spare time. Carly is like a real life Lisa Simpson, if Lisa Simpson were also super fun and prone to Random Dancing sessions.

There’s something so downright charming about the self-professed “Computer Whisperer.” Even when the show is not very good (and believe me, Buffy fanatics, that’s often), Willow is always a peppy, optimistic light. Well, there was that one rough season – but we’ve all got our bad days. Willow makes no apologies for her love of books and computers, despite her adorable soft-spokenness. And though she’s often under Giles’s mildly bemused feet in the first few seasons, she’s an unceasing help to the Scoobies as time goes on, operating firmly in her Hermione role and getting the lot of them out of trouble. Willow wasn’t just a pioneer in the depiction of lesbian relationships on TV– she was one of the first real geek girls on the small screen, too. Brava!

With an honorable mention to Bennett (Summer Glau) on Dollhouse. Hell, Joss Whedon should probably just be awarded a medal at the end of this article.

And with a dishonorable mention to Freaks and Geeks‘ Lindsay Weir, for so blithely giving up her Mathletes geek status for repeated failed attempts at popularity. Come on, Linds. All the cool chicks are geeks now.