Let's unpack this one slowly, shall we? 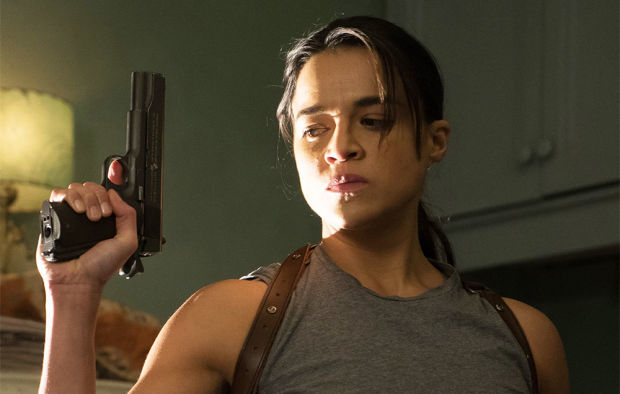 Listen, there’s a lot of things wrong with this upcoming movie, (re)ASSIGNMENT, not the least of which is its horridly transphobic premise which involves a male hitman being forced to undergo unwanted gender reassignment surgery as part of some mad doctor’s scheme for revenge. If that sentence doesn’t set off all the red flags in your head, then allow me to break this whole thing down for you.

It’s no secret that there still exists a massive stigma against trans lives. According to the 2011 National Center for Transgender Equality survey, 63% of respondents reported experiencing significant acts of discrimination, e.g., lost jobs, eviction, bullying, loss of family, incarceration, and/or denial of medical service. That last bit is especially resonant in that there still exists a massive lack of understanding regarding the medical needs of trans patients. The same study states that 50% of trans patients have had to educate their health providers about trans health. Things have gotten better since then thanks to the creation of websites like My Trans Health and Rad Remedy.

But what remains is this lack of understanding on a majority scale. The general public still buys into many myths surrounding trans people, and that’s the thing with (re)ASSIGNMENT. It, as both a major feature film featuring a cast with some star power pull, actively and directly harms public understanding and perception of trans issues by perpetuating incredibly hurtful, harmful tropes that many trans stars have worked to combat over the past few years.

I want to make it clear right now: while we don’t know the full details of the story, nor do we know everything about the movie’s characters, it’s more than likely a stretch to consider the protagonist a trans character. Forced feminization and coercive surgery are not explicitly tied to trans people’s experiences. These two concepts do not go hand in hand with the experience of a vast majority of trans people. It’s there that the first of many issues with this movie lies: it creates this false connection that something like this is the trans experience somehow, that the character might be a trans character.

Just take a look at the name: the movie was once titled Tomboy, but has since found a new name in (Re)Assignment. If you type (Re)Assignment into Google, it autocorrects it to (reassignment, which turns up the Wikipedia entry on gender reassignment surgery. In trying to find a body horror movie, people are redirected to the trans experience, forging a connection between this film and actual trans people.

Do you see what I’m getting at?

So if for a moment we make that stretch and consider the protagonist to be a trans person, then the problems become significantly worse.

For starters: the idea that something like gender reassignment surgery, which has the potential to be a massive positive life-affirming procedure, can be inflicted upon someone as some sort of punishment is utterly insensitive. While not every trans person desires surgery, those who do already face harsh discrimination for daring to go after it. As the survey explains, “If medical providers were aware of the patient’s transgender status, the likelihood of that person experiencing discrimination increased.” If the mere act of disclosing your trans status to the gatekeeper who’s supposed to help you is difficult, then the thought of asking about surgery seems like such a far away impossibility.

Changing the connotation of something so positive to something so horrifying and negative is just insulting. It demonstrates a very real, very damaging misguided perception of just what trans people go through, should they elect to undergo medical transition. It turns the procedure into an effigy, something that drives someone to anger and destruction.

That’s not what it is, not at all, and this presentation works directly against the efforts of trans people who have worked so hard to change the public perception of the trans community.

In Julia Serano’s Whipping Girl, Serano touches on the idea that when it comes to trans women, we’re undeserving of consideration or dignity because we’re giving up something that society tells us we should aspire to: being men. In so doing, we’re freaks; we’re monsters, performing the unthinkable by working against the grain that is society’s belief in gender roles. At the heart of this issue lies this idea that women are somehow lesser than their male counterparts, and that the worst thing a doctor (mad or not) can do to someone isn’t killing them; it’s taking away their manhood.

Not only is that idea misogynistic as all hell, it highlights one of the central beliefs of why trans women are considered by society-at-large to be, well, not human.  (re)ASSIGNMENT reinforces these thoughts because the removal of male characteristics from the protagonist will, undoubtedly, be painted as “the ultimate loss” by the villain (or possibly the entire cast of characters). It’s a punishment, it’s something to be feared and worried about, and by extension, so, too, are those who undergo such surgeries.

Even if, for a moment, we can set aside the problem-riddled story, there’s still a problem in that the production chose Michelle Rodriguez to play the role of the assassin and protagonist. Placing a cis woman in a role where (even as problematic and horrendous a portrayal as it is) a trans surgery plays a major role is, once again, the perpetuation of a trope made infamous by every cis actor who’s played a trans role. Jared Leto in Dallas Buyer’s Club, Eddie Redmayne in The Danish Girl, Felicity Huffman in Transamerica, Hilary Swank in Boys Don’t Cry; these are all names in a long legacy of trans erasure. Don’t make the mistake of thinking that having a cis woman play a character that (when stretched) could be considered a trans woman somehow makes it okay. This is still a cis actor just playing a sketchy-as-hell trans role.

Rodriguez, in a chat with TMZ, defended the role, saying, “I remember a day when white people were playing black people. So it’s just about the evolution. Thank Kris Jenner [sic] for becoming who he became, and now you have a popular subject matter that nobody wanted to make a movie about and now everybody’s on it.” Really, though, if you can’t even name the proper Jenner (it’s Caitlyn, by the way), then maybe you shouldn’t be trying to defend playing a trans person in a movie that shouldn’t exist at all. Just a thought.

Once again: we don’t know the full details of the story, nor do we know the full script. But given Hollywood’s history in handling trans issues, it’s incredibly difficult to offer everybody the benefit of the doubt. Something tells me I shouldn’t expect a nuanced look at trans issues in a movie about an assassin and rogue surgeons. I hate to sound so alarmist, lest this post be viewed equally as sensationalist as its subject, but there’s a significant chance that this movie can and will do harm to the already precariously balanced image of trans people in the world.

That, above all else, is the biggest problem with this movie. In a world, our world, where positive trans representation and media are only just beginning to blossom, (Re)Assignment stands as just one part of a larger cold snap that could make that flower wither on the vine.

Do better, creators. Understand the power that you have to shape public perception, and maybe—just maybe—we can find ourselves living in a place where there are just so many positive examples of trans people that a movie like this doesn’t even register in the public consciousness anymore.

Wouldn’t that be a great world to live in?