She laughs so she does not cry. 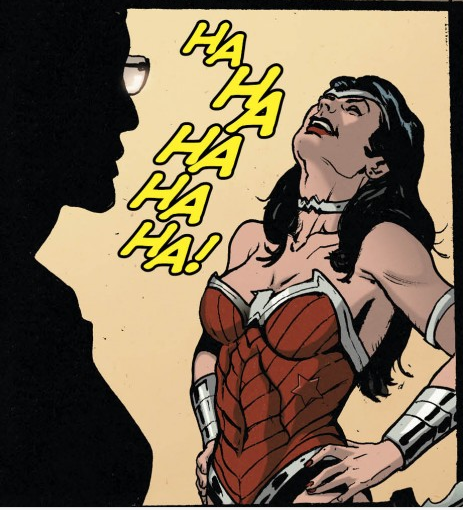 Gah, Hera: maybe it was self-evident that Zack Snyder wouldn’t be able to handle Wonder Woman’s Zeus-less origin story, but, fool that I am, this still stings. During a recent interview at the Loyola Marymount School of Film and TV, Dawn of Justice producer Charles Roven revealed that Wonder Woman will be a demigod in the film, in line with her revamped (and in my opinion, way less awesome) origin story from the New 52. Here’s an extremely brief clip of the announcement:

It’s totally possible that the producer revealed some more details outside of the context of this video that might satiate fans who loved the original origin story, but as it stands now, it looks like Dawn of Justice will honor changes made in 2011 to make Diana’s background more accessible to readers. Rather than being sculpted out of clay by Hippolyta, as was canon pre-52, Wonder Woman will instead be the child of Hippolyta and Zeus. (Apparently DC walks a fine straining-credibility line. A God making a baby? Totally normal. Hippolyta having a child on her own? Nonsense!)

I’m sure some readers prefer the New 52 version of Wonder Woman’s birth–making a baby out of clay is straight-up-weird, albeit beautifully symbolic–but I’m still disappointed that the movie will lack the complexity of the original story. I’m zero percent surprised that Snyder decided to include Zeus. But I would have actually been excited for Dawn of Justice if he’d defied expectations just this once. Thoughts?