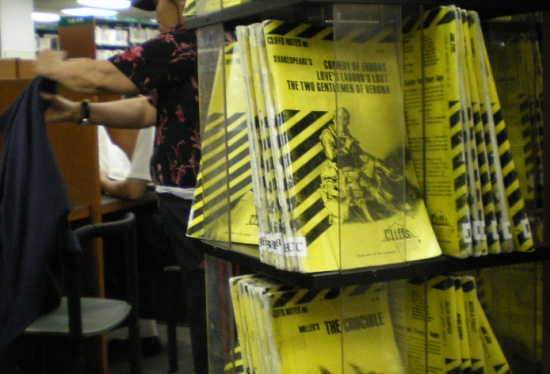 I’ll admit that I’m only familiar with Rap Genius because of comedian Hannibal Buress’ hilarious “Gibberish Rap“ and the equally humorous breakdown of the lyrics he gave on the site. I’ll also admit that I only know about Cliff’s Notes because I went to high school and am lazy. It doesn’t seem likely that these two things would ever wind up in direct competition with each other, but with the launch of Poetry Brain, Rap Genius has fired a brief, easily understood version of a blow across Cliff’s bow.

Rap Genius is a site where users can annotate rap lyrics to put them into context and give listeners a better understanding of what it is they’re hearing. They describe themselves as the convergence of rap lyrics, Wikipedia, and Urban Dictionary. It’s sort of like a crowd sourced Cliff’s Notes for rap.

Cliff’s Notes, of course, gives students a chance to not have to read books for class by offering summaries, outlines, and explanations of popular texts.

Rap Genius’ new venture, Poetry Brain, seeks to do something similar. What Poetry Brain will cover includes poetry (obviously), literary texts, academic papers, and political speeches. Rather than giving rigidly formatted summaries and descriptions, Poetry Brain wants to be something more creative. The leader of the project, Austin Allen, says, “We’re hoping for any given text to provide the best possible close reading of the text line by line.”

Since opening up the annotation to the public can result in a complete nightmare of erroneous and downright ludicrous comments by users, Poetry Brain will be moderated by editors to make sure everything is up to snuff.

Poetry Brain is already being accepted into the academic world. MIT’s literature department will be using it for poetry courses beginning this semester. The students can be assigned a text to read and make annotations on Poetry Brain that their professors can then review, edit, and give feedback on.

If any MIT professors are looking for a text to have students analyze, might I recommend “Gibberish Rap” by Hannibal Buress? I think you’ll find his use of absurdity and interesting take on rhyme scheme refreshing.