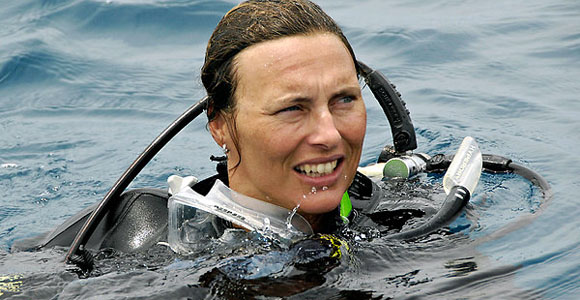 The New York Times has brought something wonderful to my attention. There’s a woman who’s akin to Jane Goodall (primate researcher extraordinaire)…but with sharks. Considering sharks aren’t known to charm humans very often, Rachel Graham has an uphill battle to protect them.

Graham is a conservation biologist whose goal in life is to help marine life but sharks are her forte. “As the director of the Wildlife Conservation Society’s Gulf and Caribbean Sharks and Rays Program, Dr. Graham must overcome deeply held fears and prejudices in her efforts to outlaw fishing of various shark species, including the whale shark, a playful and friendly creature that migrates to the western Caribbean every spring,” writes the NY Times. “That species of shark is now protected off the coasts of Belize and Mexico, and last May Dr. Graham received the 2011 Gold Award and about $100,000 from the Whitley Fund for Nature in England for her work on its behalf.”

Graham told them her family was migratory growing up and said one of the reasons sharks appeal to her so much is because they are a migratory species. “Wherever we lived, I was always bringing home creatures — lizards, snakes, scorpions. Perhaps because I was this blue-eyed tomboy in places where no one else was that, I identified with marginalized animal species. My mother tells the story of my coming home from school, complaining: ‘It’s so boring there. Nobody wants to talk about piranhas or sharks!'”

She also considers them beautiful and graceful. “On an ecological level, they play an important role because they keep their prey species in check,” she said. “The other thing is that once you get to know them, you can see that there’s great intelligence there.”

While she’s an activist, Graham doesn’t always feel the need to lecture others. For example, she was offered the highly controversial shark soup once. “When I was in Taiwan in 2005 for the world’s first whale shark ecotourism conference, I was actually offered hammerhead soup,” she said. “We went to some restaurant and these lovely people set this bowl in front of me. I just picked at other dishes and said nothing.”

Although Graham is comfortable around sharks, unlike most of the world’s population, that doesn’t mean she forgets their danger. “I’m always sensitive to the moods of the sharks. If they are active in a certain way, I’ll leave,” she said. “If they start circling, I’m out of there! But I have to tell you, that kind of caution isn’t exclusive to sharks. I’ve gotten out of the water when I saw dolphins — yes, adorable sweet dolphins — acting in ways I found alarming”

She also seems to have a great sense of humor. The NY Times asked her if Jaws was one of her least favorite films to which she responded, “In fact, it’s not my least favorite movie. It’s got such great lines that as shark researchers we use again and again. Like ‘We’re going to need a bigger boat!’ We love that line!”

Read more about this interesting woman at the NY Times.