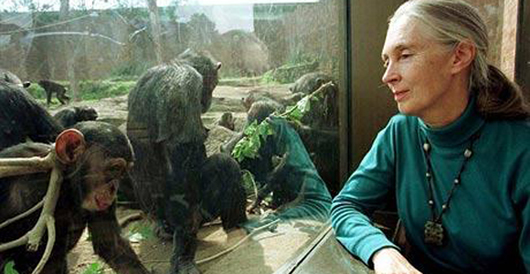 Primatologist Dame Jane Morris Goodall is now 77-years-old and the subject of a documentary titled, Jane’s Journey, by German filmmaker Lorenz Knauer. It’s one of 15 finalists for this year’s best documentary feature Oscar and the activist recently opened up about it.

“It’s very peculiar, looking at your life spread out like that,” she told The Hollywood Reporter in an exclusive interview. “I was very moved by what my son said — he’d never said some of those things to me — and it certainly brought us closer together. It’s amazing that a film could do that, but it did.”

THR writes, “The roughly two-hour film features scenes of Goodall at her at her home in London, her longtime work site the Gombe Stream National Park in Tanzania, three lectures that she gave in the United States and during a visit to a hippo pool in Greenland. It includes interviews with her, her son from the first of her two marriages (with whom she has had a complex relationship) and numerous colleagues, friends and relatives. And it includes footage that was provided to the filmmakers by several of Goodall’s ‘Roots & Shoots’ community service organizations that are located in more than 100 countries around the world.”

Goodall reveals in the documentary where she got the inspiration to first travel to Africa and study apes from. It was by reading Tarzan as a child. “I fell in love with this lovely, glorious lord of the jungle,” she said, “and then he went and married that other stupid Jane!”

She also talks candidly about her two marriages and her shift into public activism.  “The gist of the message that Goodall aims to deliver in her travels and through Jane’s Journey is one that she emphasizes to me during our conversation, as well,” writes THR. “We have harmed the future for our children — I mean horribly, horribly harmed the future — but it’s not too late,” she told them. “I’m so sure it’s not too late. But we have to change the way we do things.”

You can listen to the entire 30-minute interview at The Hollywood Reporter. They also have a review of the documentary posted.