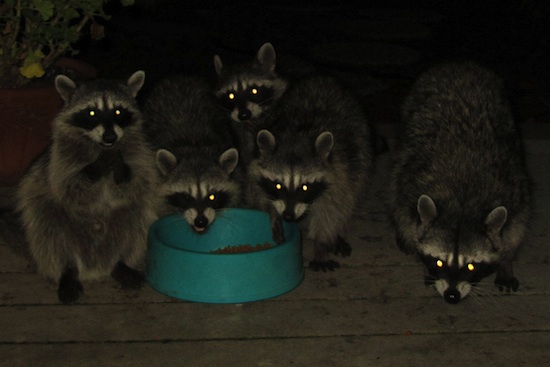 There’s always been something I didn’t trust about raccoons. Maybe it’s the fact that they’re scavengers who have knocked over more of my garbage cans than I care to recall. Or maybe it’s just their beady, criminal eyes resting in the domino-masks that denote them as nature’s criminals. Whatever the reason, all my suspicions about raccoons were confirmed this morning when news broke that a pair of raccoons — who are probably terrorists — have taken over a tower crane in Seattle, scaring off workers and hamstringing construction work on a new apartment complex.

The two raccoons apparently made the 150 foot climb to the top of the crane and decided they liked the view, making themselves right at home in the cab of the crane.

That little home is now a ‘No Construction Workers Allowed’ zone, as the raccoons — which one witness reported to be “as big as a dog” — have chased off workers just trying to do their jobs. That’s a small mercy, really — we should all just be glad that they haven’t decided to start operating the crane themselves.

Animal control experts were called in yesterday to attempt to capture the critters humanely, but that usually simple task is complicated by the fact that it needs to be done on a sky crane 150 off of the ground. Frankly, that will complicate pretty much anything, we’ve found, but especially catching a raccoon, which can be… maybe feisty is the term?

While many folks tend to view raccoons as cute and cuddly, they’re not known for leaving a place before they’re damned well good and ready, and until you’ve had a good big specimen rear up on it’s hind legs and hiss at you, you have not known fear. While construction continues elsewhere on the site, the sky crane is out of commission until the raccoons can be flushed from the cab, but we’re wondering if the contractor here wouldn’t be better off just cutting their losses. The site belongs to the raccoons now, and we suspect they won’t give it up without a fight.