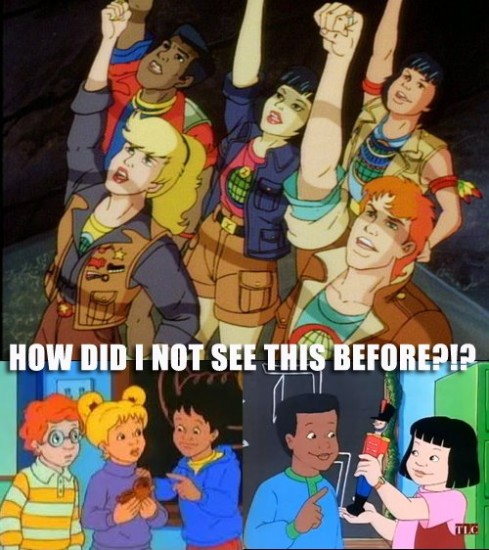 Contributing to the Grand Unified Field Theory of ’90s Era Cartoons (GUFT9EC) is a comparison image found on Jamie Steinheimer’s Facebook page. It posits that not only did The Magic Schoolbus and Captain Planet take place in the same universe, but that the schoolkids from Magic Schoolbus eventually became the Planeteers. The similarity is certainly there, but it really just creates more questions than it answers.

For instance: what happened to the other kids on The Magic Schoolbus? And what about the obvious incongruities of the character’s backgrounds — namely that all the Magic Schoolbus kids were ostensibly American schoolchildren and the Planeteers were all from different countries.

Here’s my attempt to reconcile the differences:

Gaia pulled a Jacob (see: LOST), kidnapping a bunch of children and relocating them to an island where she brainwashed them into thinking they were in “school” and she was their teacher, Miss Frizzle. In reality this was an indoctrination camp where she created the perfect pollution fighters by instilling a love of science and ecology into them at a young age.

Not all the kids made the cut. Phoebe resisted the brainwashing, unable to forget her previous life and constantly making references to her “old school.” It was a pathetic cry for help, and an attempt to hold onto her lest shred of sanity. Ralphie fell under Janet’s spell and the two escaped the island, only to be driven mad by their memories. Eventually, they turned to a life of crime becoming Hoggish Greedly and Dr. Blight respectively. The mysterious time-dialating effects of Gaia’s island accounts for their discrepancies in age. Keesha’s current whereabouts are unknown.

When her “class” had matured sufficiently, Frizzle/Gaia wiped their memories and sent them out as an eco-friendly sleeper cell until she had need of them. Years later, she gave them the power rings, and sent them off on an ecologically toyetic series of adventures.

A new addition to your own personal headcanon, or a pleasant coincidence from a suspiciously ethnically diverse cast: You decide. Tune in next week when I’ll use Transformers and Wall-E to explain the Cars universe.