R. Kelly's Victim Speaks Out on Years of Abuse | The Mary Sue

R. Kelly’s Victim Speaks Out on Years of Abuse 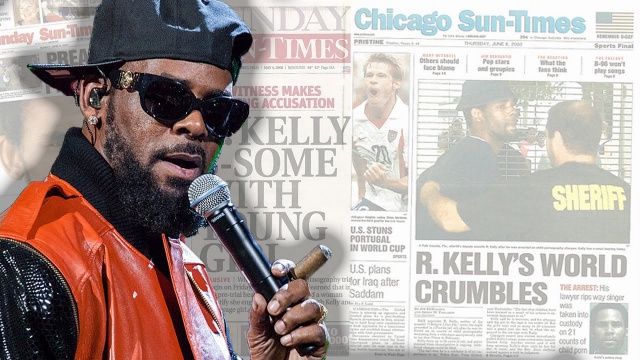 For years it has been very much and open secret that R. Kelly is a sexual predator and it has been turned into a joke. From the Dave Chappelle’s “Piss on You” skit to The Boondocks episode “Trail of R. Kelly” there has been a serious lack of consequences about how R.Kelly has spent his adult life preying on adolescents girls. Now, in a Rolling Stone’s article “Surviving R. Kelly” Kitti Jones, a former girlfriend of R.Kelly is telling her story about abuse at the hands of the R&B idol.

Kelly’s history of manipulating women is a long one, most noticeable beginning when he at 27 married late R&B singer Aaliyah when she was 15-years-old.

In 1996, Kelly was sued for $10 million by aspiring vocalist Tiffany Hawkins, who claimed that she first began having sex with Kelly at age 15 and “suffered personal injuries and severe emotional harm because she had sex with the singer and he encouraged her to participate in group sex with him and other underage girls.” (The lawsuit was settled for an undisclosed sum in 1998.) Kelly would eventually settle separate suits brought by two more women who said they’d had sex with him when they were under 18.

Then of course there was in the infamous video tape in which he was accused of urinating into an underage girl’s mouth. Despite the footage and testimony from others, Kelly escaped any prosecution and his career did not suffer any serious damage in the aftermath.

After finally going to trial in 2008, Kelly was found not guilty on all 14 counts. (Jurors admitted after the trial that they could not verify the identity of the girl, who did not testify, despite more than a dozen witnesses identifying her on the tape. Consequently, they could not definitively say that she was underage.)

The loyalty given to Kelly by has fans was something Jones shared, she had long been a fan of R.Kelly and was excited to meet him after a concert in 2011. Jones is different from the usual profile of victims by Kelly. She was an adult. Jones had a career in radio, a child, ex-husband and financial autonomy. However, when faced with the type of charismatic cult-like manipulator that Kelly is, it is hard to see what is happening before you’re trapped.

In Jones’ words, she was instantly smitten with the singer, “He was everything that I thought. He was handsome. He represented a powerful man. He just owned the room [and had] all the things that make up that ‘Oh my God’ factor.” Kelly then slipped his phone number to Jones and told her via text to only refer to him as “daddy.”

The night would begin, according to Jones, a two-year relationship with Kelly rife with alleged physical abuse, sexual coercion, emotional manipulation and a slew of draconian rules that dictated nearly every aspect of her life. Those rules, including what and when to eat, how to dress, when to go to the bathroom and how to perform for the singer sexually.

Jones and Kelly continued to text and when they were finally reunited, Kelly slowly because to reveal some of his sexual habits to Jones.

“He brushed past me,” Jones says. “I’m thinking we’re going to hug or peck each other. But he plopped down on the couch and pulled out his penis and started pleasuring himself.”

“I was attracted to him and was just like, ‘Well, OK. Fine,'” she says. “Maybe he just has weird ways of getting off.” The two had oral sex that weekend, with Kelly, according to Jones, saying things like, “I gotta teach you how to be with me” and “I gotta train you.” “He was like a drill sergeant even when he was pleasuring me,” Jones says. “He was telling me how to bend my back or move my leg here. I’m like, ‘Why is he directing it like this?’ It was very uncomfortable.”

He would warn Jones not to be jealous of the women in his life because he “raised” girls, an idea that Jones could not full comprehend at the time. The article itself is worth reading for the amount of depth it gives into the sadistic and manipulative way R. Kelly treated not only Jones, but other women. Starvation, keeping them from contact with other men, lying about relationships with other women, forcing women to have sex with in each other and regular beatings if they questioned his actions.

One of the most disturbing passages is when Jones recalls Kelly bringing another one of his girlfriends into the bedroom for the first time:

The singer brought the woman in naked and told her to crawl toward Jones and perform oral sex on her. “He told me, ‘I raised her. I’ve trained this bitch. This is my pet,'” she says.

Jones was able to free herself from the immediate presence of Kelly, but the lasting impact of the emotional damage she endured will never be fully gone. She was violated in cruel ways and by putting her voice out there she was face the stigma of people asking “why she didn’t leave” or saying  “she’s grown” and can make her own choices. It is clear from everything Jones held no power and Kelly worked to systematically make her dependent on him.  Her speaking out in this article is a way for her to share her story and try to break through the illusion that Kelly’s fanbase has about him.

There is a level in which all of us have been complicit in allowing R.Kelly to continue to succeed despite the repeated revelations that he is a terrible man. We have laughed at the jokes, danced to his songs in the club and at the cookout, we have tried to separate the man from the actions in order to enjoy the music. Well, this is where that apathetic support goes. It allows R.Kelly to continue to emotionally and physically abuse black women. He is a monster, and the pop culture riffs on him and made us forget, but I hope that Jones’ words resonate and show that R. Kelly is not worth protecting.