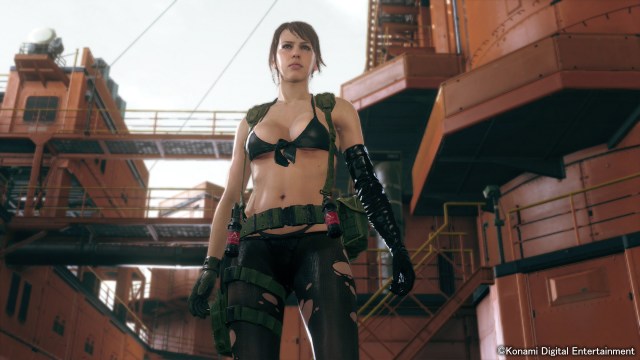 Remember back in 2013, when Metal Gear Solid fans first reacted to the costume design for the character Quiet? Hideo Kojima assured us all that Metal Gear Solid V would include a narrative explanation for Quiet’s bikini, and that once we found out what it was, everybody would “feel ashamed of your words & deeds.”

Since these tweets came out, a lot of fan theories have circulated about Quiet’s choice of dress. Many folks worried that the reveal would be upsetting, especially if Quiet’s outfit choice would somehow relate to a former traumatic event. Kojima’s emphasis on “shame” had a haunting effect on the types of theories that fans created.

So, uh, the actual explanation for her outfit has come as a bit of a relief to me, personally. Here’s what it is, so please close this article if you don’t want to read a spoiler: Quiet is infected with a sci-fi parasite, so she can only breathe through her skin and she can’t open her mouth to speak. She’s actually the second sniper character in Metal Gear to have this backstory, although last time this trope came up, the guy got to wear way more clothes. This time it’s different, because uh … hm,. Well … okay, I guess we don’t have all the answers.

Oh, also, speaking of warnings that you might want to hear ahead of time when it comes to this game, there’s also a scene where Quiet has to fight off an attempted rape. And she has to use her photosynthesis powers to do it! Meaning, she has to get naked in order to fight off a rapist. So, that’s a thing.

Anyway, it seems to me like lots of people are feeling relieved that Quiet’s outfit has a silly, corny, almost laughable explanation rather than the horrific one that everyone worried about. But do we even really have an explanation for the outfit at all, here? Why is Quiet wearing this outfit in particular, as opposed to any number of other equally breathable designs? Why would she wear ripped stockings that aren’t particularly breathable, as opposed to a linen suit, or even just a bikini without the ripped stockings?

Why didn’t Kojima just admit that he wanted Quiet to look this way because he thought it was cool and sexy? Because … it seems pretty obvious that’s the actual reason for this. And no one needs to be “ashamed” about it. It would be nice if we’d all be a little more up front about that sort of thing, actually.

(via Kotaku, image via Gamespot)