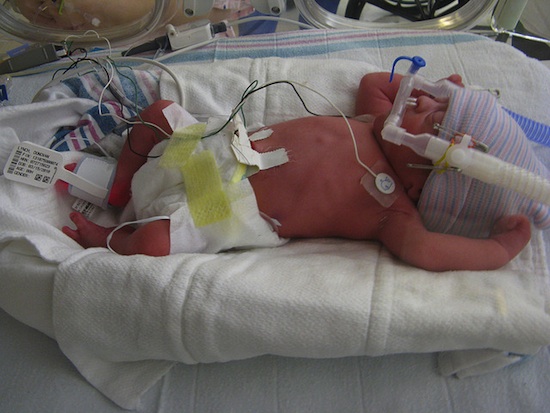 A new genome sequencing technique in use at Children’s Mercy Hospitals and Clinics in Kansas City has sped up genome sequencing, sifting through the DNA of ailing newborns in just over two days, rather than the weeks it can often take to fully sequence a genome, thus speeding up being able to detect genetic disorders.

By speeding up the identification of genetic maladies — which investigators at the hospital say affect as many as 1 in 3 of the babies admitted to their Neonatal Intensive Care Unit (NICU) — researchers hope they can speed up treatment as well, sending newborns home with their parents after shorter, less expensive hospital stays. And for some young patients it could mean the difference between life and death.

Genome sequencing technology has moved to the point where it’s not actually sequencing a genome that takes the most time — it’s parsing the mind-boggling reams of data that result from that sequencing. Analyzing that data quickly is key, especially in places like NICUs, where every minute can count and patients aren’t exactly equipped to explain their symptoms very well.

To improve the speed of diagnosis, researchers narrowed the field of genetic disorders they look for in the sequenced genome, seeking out 600 genetic disorders, most of which are difficult to diagnose as a result of being single gene mutations. The plan is to eventually expand that database to the 3,500 known genetic disorders while offering doctors a way to narrow results by identifying symptoms or factors that will ideally keep the searching process streamlined and swift.

Researchers conducted the study on 7 critically ill newborns in the NICU, each of whom was either stillborn or died in the hospital. Though they weren’t in time to help any of these children, the new process accurately identified the genetic problems being brought to bear in 5 of the 7 infants, letting researchers know they are on the right track to speed up the process — and hopefully save some lives in the future by starting treatment before sick newborns are too far gone to save. The process isn’t cheap, running over $13,000 per test, but that cost can be expected to drop as the technology continues to improve. At the risk of being overly sentimental, we doubt that the bill is the first thing on the minds of any new parent with a child in the NICU anyway.