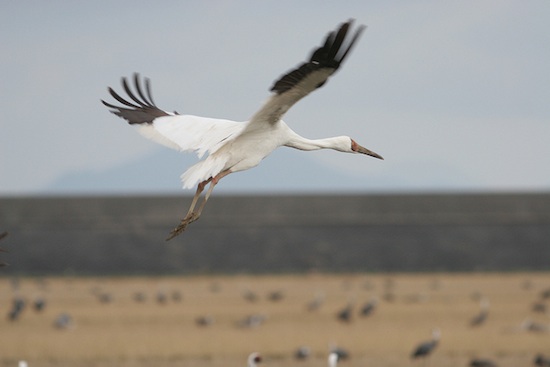 You read that headline right: Vladimir Putin is basically the little girl from Fly Away Home, except for how Anna Paquin has never had her political enemies locked away in a Russian prison for two years for playing guitar in a church. As far as we know. What we can be sure of is that Putin, the former head of the KGB, former Prime Minister and current President of Russia, took the helm of a powered hang glider and proved that his abilities as a leader are so great, even wildlife must follow his directives as he took point in the first stages of a migration of young Siberian cranes, who are due to leave on their annual trip to winter nesting grounds in Iran and India soon.

Putin, who was accompanied on the flight by a veteran jet pilot, dressed for the flight in a white jumpsuit that was meant to remind the young birds of an adult crane. This illusion was no doubt spoiled by the fact that most adult cranes don’t arrive for migration in a motorcade or need a hang glider with a golf cart motor attached to it to get airborne. Then again, immature cranes aren’t known for being the savviest thinkers in the world.

While the brilliant deception wasn’t initially successful, a small group of cranes took off and followed Putin’s glider on its second run into the sky. No word on whether the birds were threatened with facing hooliganism charges if they failed to obey the orders of their nation’s glorious leader, but ask yourself: If there’s one man in the world who would threaten an endangered crane with jail time, who is it?

Th one and only correct answer is: Vladimir Putin, a man who can take time off from being president of a country to pose for shirtless photos on horseback and teach birds to fly. That’s who. It wasn’t a little bit of time, either — Putin reportedly spent a year and a half training for the flight, only to donate the glider, which he purchased with his own funds, to the crane conservation project that gave him the chance to fly with endangered birds. Which is pretty gracious, considering that if Vladimir Putin wants to fly with your birds, there is little anyone can do to stop him.