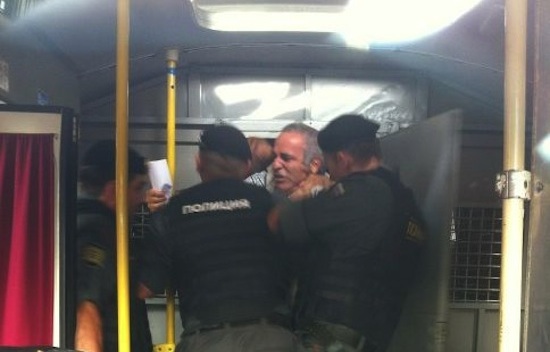 In what has to be the most foregone of conclusions, all three members of the Russian punk band Pussy Riot have been found guilty of hooliganism this morning, stemming from an impromptu guerilla performance in a Russian Orthodox church. To anyone who’s been following the story — or just has cliched ideas about the Russian justice system functioning only as the arm of a corrupt authoritarian state — this comes as no big surprise. One unexpected twist to this morning’s story, though, is the apparent arrest of Chess Grand Master Garry Kasparov outside of the Moscow courthouse where sentencing took place. Kasparov has been an outspoken member of the Russian political opposition, which is a pretty good way to get beaten and thrown into a police van on charges of “Meh, it’s Russia, we’ll figure out what we’re arresting you for later.”

Kasparov’s appearance at the protest was not expected or publicized, but makes sense considering the touchstone issue that the Pussy Riot trial has become for reformists and political activists in Russia. Kasparov, who has been a strong critic of Russian President Vladimir Putin, was apparently speaking with journalists outside of the courthouse when he was wrestled into a police van. Kasparov resisted and was beaten by officers, according to witnesses, and remains in custody. He has managed to get an update to his Facebook page, though, and is apparently being held but doing well, beating and arrest aside.

Hooliganism, for those of you who aren’t familiar with the term because you don’t come from the 19th century, is a similar charge to, say, disorderly conduct here in the U.S., except that it carries pretty severe jail terms — in this case, two years of prison each for band members Nadezhda Tolokonnikova, Yekaterina Samutsevich, and Maria Alyokhina. The charges stem from a guerilla performance of a song protesting the Putin administration in a Russian Orthodox Church, which is apparently “hooliganism motivated by religious hatred” in Russia. So, that’s good to know.

(via NYT, pic via Olaf Koens)