Smuggling! Cloning! Pumpkin theft! Chunkin' is a lot weirder than we thought. 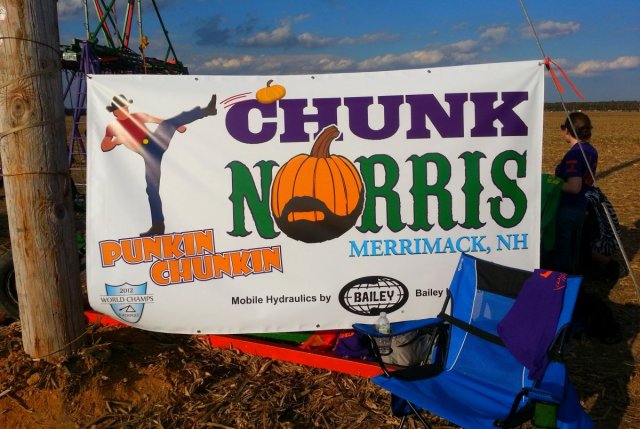 The Science Channel is airing their annual Punkin Chunkin special Thanksgiving night at 8:00PM ET. If you’re not familiar with it, it’s a show about people who build machines that hurl pumpkins as far as possible — some nearly a mile. It’s a fun look at physics and engineering, but we went to event this year and found it was actually a whole lot more.

At New York Comic Con this year we had the chance to sit down with Mythbusters Kari Byron, Tory Belleci, and Grant Imahara who host the special, as well as “chunkers” Fat Jimmy and Frank Shade. It was an interesting chat, and we were invited down to the big event in Delaware held last month.

We kind of thought we knew what we were getting into. We like physics. We’re into engineering. We enjoy watching pumpkins explode on impact. That’s all there, of course, but it’s so much more involved than we could have possibly imagined.

The machines are broken down into category and arranged on the firing line. There are dozens of them, ranging from huge air canons to small catapults built by scout troops. It looks like they’re prepared for war, but some kind of silly war with pumpkins. That’s not to say these machines aren’t dangerous. An eight-pound pumpkin hurled with enough force can do some damage. We had to sign a safety release to get up close to the machines, and it wasn’t long before we realized why.

Here’s one of the centrifugal machines firing. We assure you, it’s about a hundred times more frightening to see in person than in a video.

We had an invitation by Frank Shade of team Bad to the Bone (We believe it’s the machine in the background of the video above) to sit in the cab of the truck it’s attached to when we met at Comic Con. We had no intention of doing so, but it was a moot point, because due to “an incident,” the Bad to the Bone team was no longer letting people sit inside their insane spinning pumpkin machine.

These machines are designed to fire pumpkins in one direction, but that’s not always the direction the pumpkins go. We saw a few “backfires” which sent pumpkins behind the firing line and into the crowd. Many of the machines themselves look like they could snap apart, and some do. There were no serious injuries we’re aware of when we were down there, but we learned of a number of minor ones.

The air cannons are the largest, and they also throw the farthest. Here’s a shot by team Young Glory.

Spectators don’t really get a good view of the pumpkins themselves, especially out of the air cannons. But that didn’t seem to quell anyone’s excitement every time one of them fired. There’s a loud rush of air, and you can see the gas puff out of the barrel. The non-air-cannon teams all seemed to be unimpressed by the cannons, usually preferring their own method of chunkin.

Team American Chunker set a world record of 4,692 feet on the day before we arrived. We spoke to team captain Brian Labrie, and were surprised to find that the world record is far from the most interesting thing about the team. The American Chunkers collected the seeds from the record setting pumpkin, and will plant them so they can fire a clone of the record setting pumpkin next year.

The record-setting pumpkin American Chunker will be cloning for next year was a White Lumina variety. They use this pumpkin because it has a higher number of ribs than other varieties, and the team believes this results in a beneficial spin. They set a world record, so they might be right. 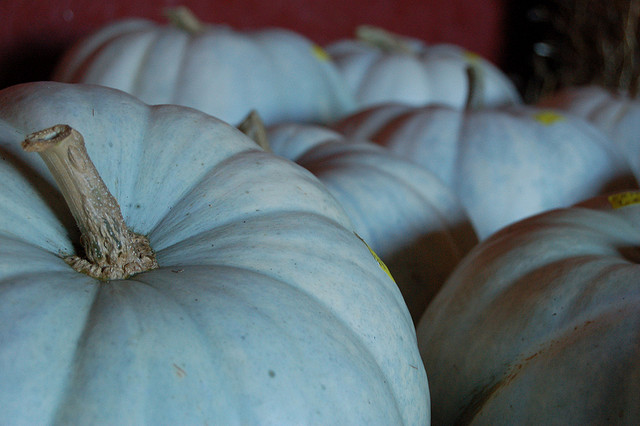 When we spoke to Labrie he was very humble about the record, saying it could have been any of the teams on the line that day. They just had a good shot. This seemed to be a common attitude among chunkers. They’re there with a Corinthian spirit — they’re competitive, and would certainly like to win, but it’s all about love of the game.

But back to pumpkin cloning for a second. A lot of the teams we spoke to used specific varieties of pumpkin, and they take their pumpkins very seriously. That’s lead to a bizarre and fascinating pumpkin bartering system. Farms donate pumpkins to the event, but the more serious teams bring their own.

We also spoke to Beth Hamilton, a team member for Chunk Norris — obviously our favorite team — and she told us that her team had recently traded a flask of whiskey for a pumpkin with another team, Chucky. There were some accusations that while the trade was going on in the Chucky camp, someone snuck over to the Chunk Norris area and grabbed an extra pumpkin, but we couldn’t get anyone to confess.

Hamilton also explained that the only reason they agreed to a trade was that Chucky was in a different class than they were. Chunk Norris is a catapult driven by medical-grade elastic tubing, while Chucky is a torsion machine that uses twisted ropes to launch their pumpkins. 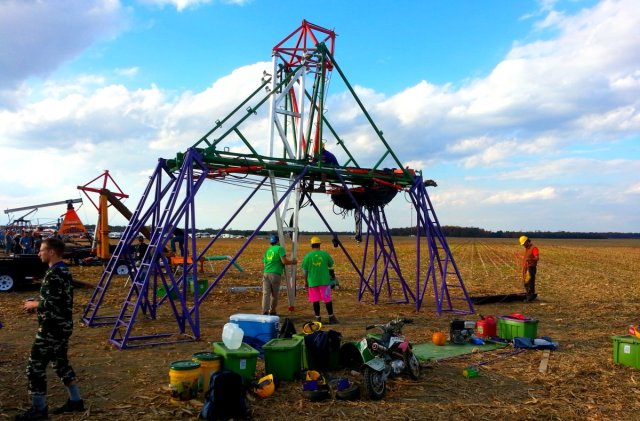 Everyone we spoke to agreed that teams in direct competition with each other would never trade for fear that they’d help their competition. Hamilton, and a few others we spoke to also said that teams take precautions to make sure that the team they’re trading with aren’t going to turn around and trade with one of their competitors. Complicated allegiances form between the team.

Like we said — they take their pumpkins very seriously. Something the Punkin Chunkin officials watch out for in particular is the use of illegal pumpkins. At Comic Con, Frank Shade told us that some varieties of pumpkin were banned for being invasive species, or difficult for farmers to get rid off once they’re accidentally planted by the chunkin’ process. When we got to the event, Hamilton told us that in the past teams have tried to sneak in varieties of melon that look like pumpkins.

We thought she was kidding, but no, she wasn’t. The advantage, she told us, was that the melons are less likely to “pie,” or break up, on launch. If your pumpkin explodes during launch, it’s disqualified. She didn’t know the specific melons people were trying to smuggle in, but we believe she was talking about the French Charentais, or other variety of European Cantaloupe.

We heard a number of different stories from teams at the event of the lengths other people will go to for the perfect pumpkin. Some prefer a flatter shape to a round one, or will want a specific number of ribs. Frank Shade told us he’d heard of people growing pumpkins in moulds to get them to the perfect shape. The downside, he said, was that the mould adversely affects the integrity of the shell of the pumpkin, making it more likely to pie.

What we found most impressive about the event is that for all the competitiveness and weirdness, everyone was still there to have fun, enjoy themselves, and to raise money for a number of charities. Besides the machines themselves, there’s a whole event going on. There are concerts, games, rides, and tailgating — so much tailgating. There’s even pumpkin funnel cake. 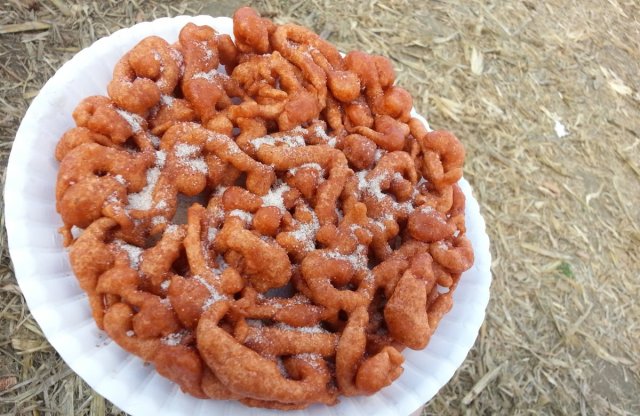 Be sure to watch Punkin Chunkin Thanksgiving night at 8:00PM on the Science Channel.

We’d like to sincerely thank everyone involved with the Punkin Chunkin event for letting us come down and get dangerously close to these incredible machines — particularly Frank Shade from team Bad to the Bone for inviting us, and Beth Hamilton from Chunk Norris for showing us around. Thankfully, Bad to the Bone and Chunk Norris are in two different classes, so they won’t be upset to know we’ll be rooting for both.

(Images our own unless otherwise specified)