How Come Nobody But New Jersey Calls the Night Before Halloween “Mischief Night?” 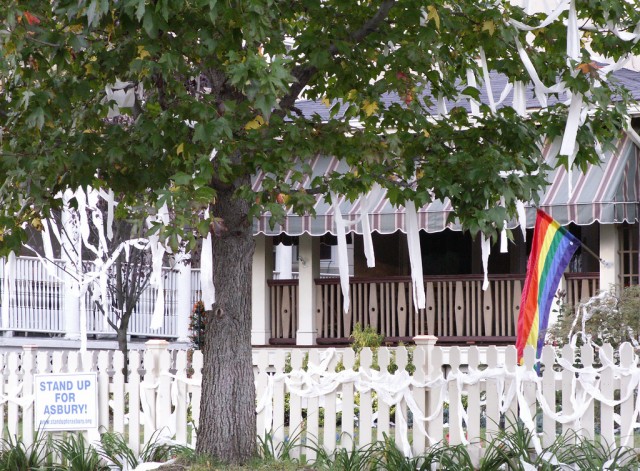 Guys, when you were a kid, what did you call the night before Halloween? Don’t look up at the headline to guess the answer we’re looking for. Just tell us. Did it not have a name that you can recall? Then congratulations, you probably live anywhere in the country but New Jersey. Good for you.

We’re sure you all probably remember those exhaustive survey maps of dialects, word pronunciations, and slang terms that came out of NC State University this summer. Haha, isn’t it cute how some people say coke and others (correctly) call it soda? But then we saw this map, and suddenly we became very concerned. 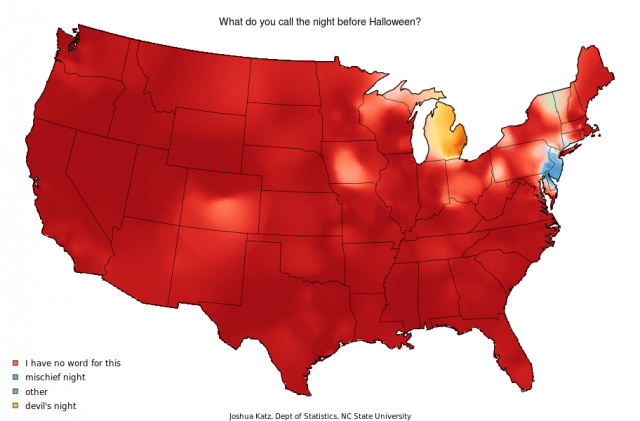 All of us here at Geekosystem grew up in New Jersey (save for our Weekend Editor Sam, but what doe she know? She’s Canadian. She probably spells it “Hallowe’en” with a dang apostrophe like some kind of Canadian), so this is more than a little jarring to us.

Michiganites are probably picking up what we’re putting down here. Apparently they call it “Devil’s Night” in Detroit, which when you think about it really should be what Jersey calls it, too. We sure do love our devils here, after all. It’s also called “Cabbage Night” for some reason in pockets of upstate New York, Vermont and the English speaking parts of Canada (okaaay, sorry, Sam). And in England it’s sometimes called Miggy Night. Of course, in England, they also used to pull pranks on the night before the Fifth of November instead, so they’re doing their own thing, really. Don’t get any ideas, Vendetta fans.

Anyway, growing up, Mischief Night was basically the time when everybody did their most elaborate “tricking,” so to speak. Why the day before Halloween instead of Halloween proper? Who knows. Possibly we all wanted to make sure that the littler kids got their chance to be cute and get candy without getting spooked by the older egg-throwing miscreants, or maybe we all just wanted to ruin everybody’s decorations before the day itself.

So where does the name come from, and why is it even a thing in the first place? Well, mischief was sort of the point of Halloween back in the day, as LiveScience tells us. November 1st was the day of the Celtic New Year, and so it was believed that spirits would play tricks on the living during the night before. After the region became Christianized the English tried to stamp out the practice, but it persisted through via the Catholic holiday of All Saints Day, and then kept going on in Ireland and Scotland after England decided that Catholicism was the worst and tried to get rid of that, too. Seriously, stop trying to tell the Irish what to do, guys. It never works.

Then all the Irish and Scottish immigrants coming to America brought the holiday with them in the 17th and 18th centuries, and it flourished primarily as a time for people to play pranks on each other riiiight up until the late 1920s. After the Depression hit, tensions in the country suddenly rocketed skyward (understandably so), and the pranks became a lot more malevolent and harmful in nature. That’s when town leaders started throwing candy at their youth to make them stop setting things on fire or whatever it was they were doing, and thus Halloween evolved into what we now know it as today. Well, okay, the candy industry helped a little bit with that last part.

So Mischief Night became a way to reclaim what the holiday is actually about — messing with people. And it’s a big deal in New Jersey — there are literally one-day curfews and “zero tolerance policies” put into place to ensure that kids don’t go out hunting for pumpkins to smash. Not that it isn’t a big deal in Detroit, though, because it’s way worse there. Devil’s Night is less about the egg-smashing and more about the gang violence and arson, apparently. Okay, never mind what I said earlier. We’re fine with calling it “Mischief Night” here. Leave the devils out of it.

In conclusion, what is the rest of the country even doing on the night before Halloween? Come on, guys! Pulls some pranks! Manage some mischief! Make this a bigger thing outside of the stupid little state that harbored three fourths of the Geeko crew during our formative years. Just, you know… no arson, please.