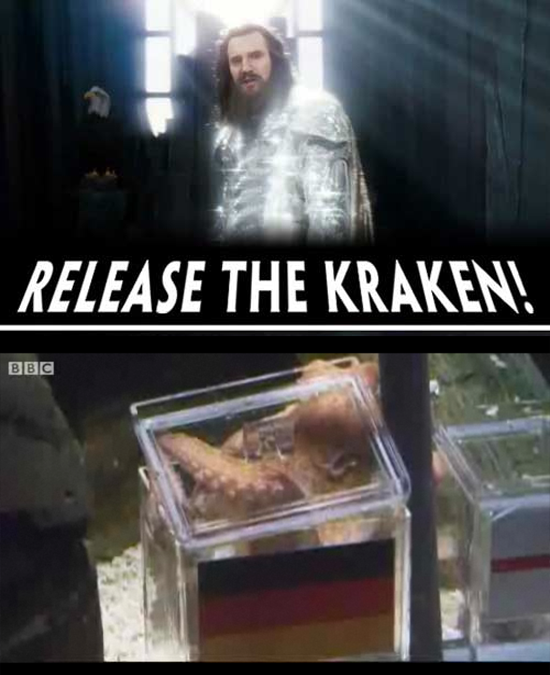 The “psychic octopus” who accurately predicted Germany’s victory over England this past weekend still has a perfect record predicting the outcomes of German matches this World Cup, and it just picked Germany again in the coming match against Argentina. But it wasn’t easy:Spiegel:

Paul has gained a sizable following in Germany by amassing a perfect 4-0 record in calling Germany’s World Cup clashes. First, he tipped Germany to beat Australia, and then followed it up by correctly predicting Serbia’s upset over Germany. Paul went on to call a German win against Ghana and made waves across the English Channel when he foresaw Germany taking down England.

Paul deliberated over the match [with Argentina] for more than an hour. He swam instantly to the German box, perhaps initially swayed by Germany’s 4-1 victory over England on Sunday. But then struck by indecision, Paul pulled back and laboriously mulled over the prospects of Argentina’s creativity and star power versus Germany’s devastating counterattack and speed. Finally, Paul wrapped his eight legs around the German box, plucked out the mussel and threw his weight behind the Mannschaft.

For what it’s worth, gambling oddsmakers currently see Argentina as the favorite. According to betting site Paddy Power, the odds are 13:10 that Argentina wins, 11:5 it’s a draw, and 11:5 Germany wins. Argentina is also seen as 4:1 to win the World Cup versus Germany’s 7:1. But then, they are not psychic octopi.