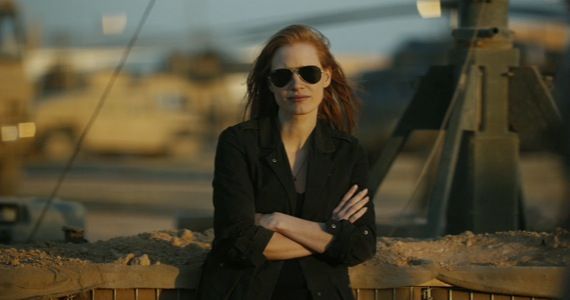 Let’s get the bad news out of the way first. As the Eternal Light of Our Life herself clarified earlier today, Jessica Chastain is not in talks for Captain Marvel (yet). Instead, she just wants to play some unspecified kick-ass female superhero with a “cool outfit” and lots of fight scenes, so yeah, Marvel…take a hint.

In an interview yesterday to promote Interstellar, Chastain (who previously advocated for a Black Widow solo film) said she’s been in some unspecified talks with Marvel about future collaborations:

We’ve talked about aligning our forces in the future, And here’s the thing with me… If you’re going to be in a superhero movie, you only get one chance. You’re that character forever. So why do a superhero movie and play the boring civilian?

Whatever it is, I want a fight scene […] I could be an incredible villain. I could be a hero. I want a cool outfit, and I want to kick ass.

Oops uh oh….I’ve never had talks about Captain Marvel. Was referring to a different film from over a year ago, in my recent MTV interview.

Of course, just because Chastain hasn’t been approached to play Carol yet doesn’t mean it’s out of the question. After all, she was featured in The Mary Sue’s “19 Actors Marvel Should Seriously Consider Casting For Captain Marvel,” and I hear that’s a pretty definitive list.

Regardless, if Marvel chooses someone else equally as rad for the role–Gwendoline Christie, say, or Gina Torres–hopefully there will be room for Chastain in Phase 3 as something other than a “boring civilian.”

I mean, she’s been to space, guys. She’s worked for the C.I.A.. Don’t cast her as someone’s sister-girlfriend-daughter, unless she gets to kick prodigious ass in the meantime.