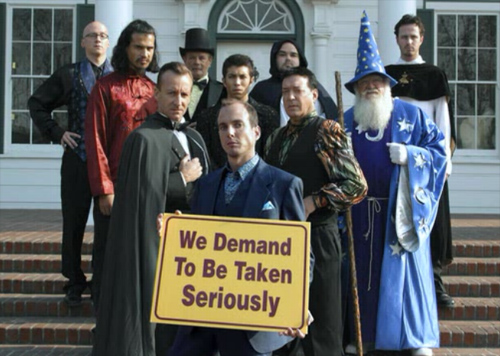 Today in protests that probably will not work, fans will march against the DC reboot at this year’s Comic-Con. And while we appreciate that fans feel the need to stand up against the things that anger them, it is worth noting that production of the new books is so far along at this point that there’s not much that will be able to stop it.

Which is not to say that fan protest has never accomplished anything. Certainly, Roswell had it’s tiny tabasco bottles, though Firefly fans have never been as lucky. But we’re talking about petitions, prolonged mailing campaigns, raising money. Not… marching with signs. Probably in costume. Hopefully not burning anyone in effigy.

Are you utterly baffled, disappointed and just ANGRY to see how DC ruins your favorite character’s design and wipes decades of comic history out of the mainstream universe? Well, you’re not alone!

And why not make some noise at the biggest pop-culture event this year, where creators, artists and writers appear in person – show them how fans – the fans of the classic characters, the (nevertheless slightly changing) designs, the character’s history and personality – really feel about it!

Look, t’s not like we don’t have our own problems with the DCnU! We do! But Comic Book Resources has dredged up a pretty relevant quote to think about, from music critic Eric Harvey:

Art needs to be challenged via critique, not marching in the streets. Art ‘protesters’ have lost the battle before they even start fighting.

Whether or not you agree with the message, when things like this come up in our lives I always take a moment to remember that one Shortpacked (which I, of course, cannot find) where Ethan has to put money in a jar every time he talks about Transformers as if it was as important as real life. Primarily, because I’d be terrified of the state of my finances should anyone institute that policy in my office regarding Batman and real life; but also because it’s a good way of calming myself down and remembering that what I’m talking about is a First World problem.

But on the other hand, we’re geeks, and if we didn’t get angry about this kind of thing, we wouldn’t be. So what do you think? Do you think this stands a chance of working?