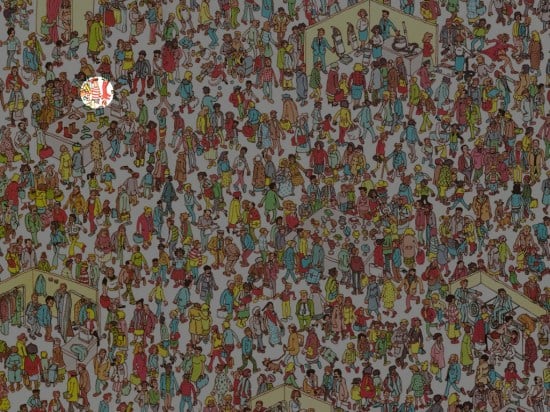 Because people with phenomenal computer skills get bored of simply being geniuses and need to exercise their genius every now and then, we, the human race, have found a way to make computers find Waldo. Over on collaborative programming site Stack Overflow, the question of how to easily make a computer find Waldo using computational software program Mathematica was posed, so the programmers collaborated and user Heike’s solution seems to have done the job, garnering the most upvotes by a wide margin.

Rather than post all of Heike’s code, which can be viewed over on Stack Overflow, we’ll simply discuss the steps his code took. First, he filtered out all of the colors that aren’t red. Next, he calculated the correlation of the Waldo scene to a black and white image in order to find the red and white transitions in Waldo’s iconic shirt. Then, he picks out the pixels in that image that were found to have a high correlation, and draws a white circle around them. He had to fidget with the level of the image, as when it is too high, the code identifies false positives.

Finally, he compares the image the code was working on — the compared one — and joins it to the original Waldo scene.

Heike’s method seems to work, with commenters granting it many upvotes and posting their support, one commenter notes that the method isn’t exactly ideal, as it requires manual tuning (fidgeting with the levels). Though Heike’s method was post a few months ago, it’s just being widely discovered now, and we couldn’t help but share it with you, as Heike answered everyone’s most important childhood question, “Where’s Waldo?” Sorry Carmen, but wondering where Waldo is only takes three syllables.

(Stack Overflow via The Verge)