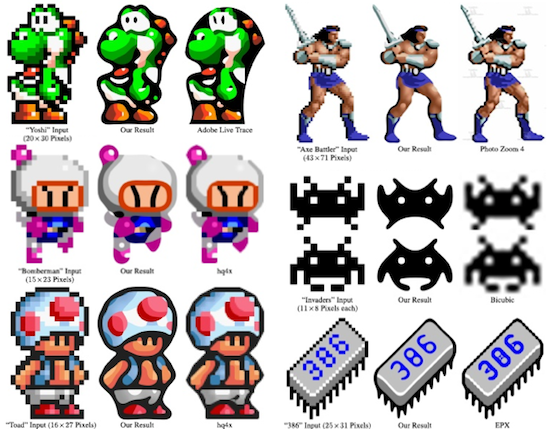 In a new research paper, Microsoft’s Johannes Kopf and The Hebrew University’s Dani Lischinski describe a new algorithmic method for converting pixel art into sweet, smooth vectors. In the examples above, each of the images in the middle show the results of Kopf’s and Lischinski’s method as compared to the pixel input on the left and the (worse) results of other depixelating algorithms on the right. (It does make the Space Invader look kind of terrifying, though.) As can be seen from the examples, this could potentially be applied to emulating classic video games, among other uses:

There are many avenues for future work. Obviously, it would be nice to optimize the performance of the algorithm so that it can be applied in real-time in an emulator. Some of the ideas presented in this work can potentially beneﬁt general image vectorization techniques.

Another interesting direction would be to improve the handling of anti-aliased input images. This might by done by rendering some curves as soft edges rather than sharp contours. A whole new interesting topic would be to look into temporal upsampling of animated pixel art images. If we magnify from a tiny input toHD resolution, locations are quite quantized which might result in “jumpy” animations. Since many modern display devices are operating at a much higher refresh rate than earlier hardware, one could improve the animations by generating intermediate frames.